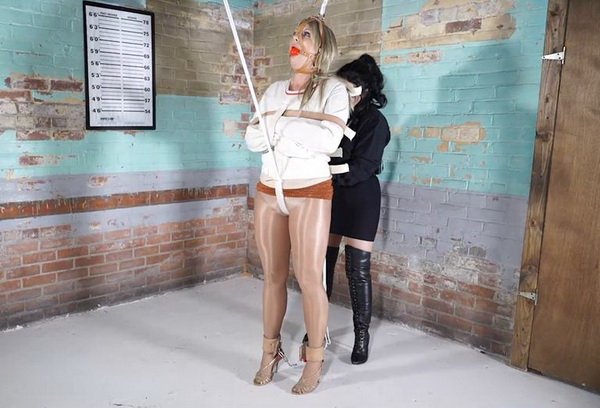 Jamie Knotts is straitjacketed in the jailset at a porn studio she had been working at earlier in the day. She was caught stealing a pricey pair of Jimmy Choo sandals and some shiny danskin tights (just figures dot com). Of course she was given the choice- play games with the security guards or have the cops called. One of the guard enters and cuffs her legs and puts a harness ballgag on her. Then he leaves her there and eventually the female guard comes back in and leads her out of that room. Jamie has had enough and she wants to go home but the fun is just starting. Her harness gag is tied off overhead to keep her posture straight. She struggles in the straitjacket a while before she gets rope on her pretty long, shiny legs. The harness gag is taken off and she is cleave gagged with vetwrap. Eventually the jacket is removed and her hands are tied overhead. Her pantyhose are pulled down and her panties are cut off and stuffed in her mouth over the cleave. Her head is wrapped with clear tape. She is much more quiet now. She has been tightly crotch rope and those overpriced heels are hurting her feet. The security guard leaves her there with her huge boobs exposed, a rope digging in between her legs and a gag she is trying not to gag on.