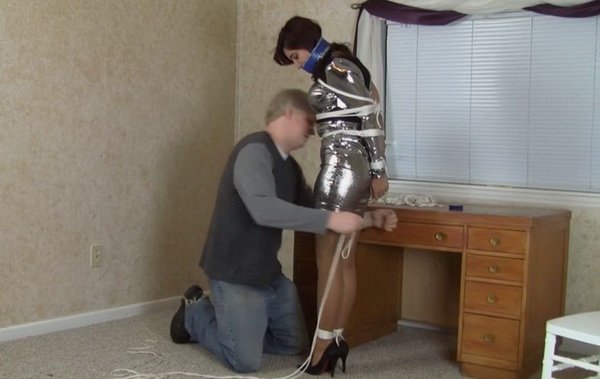 Sahrye is in Mr Big Boss’s office dressed in a sexy tight silver dress, pantyhose, and black high heels. He’s got a lot of rope and intends to make sure it doesn’t go to waste by putting as much of it as possible on Sahrye’s sexy frame. Starting with her wrists he works his way across her body with the rope binding next her ankles, then adding mouth packing and a silver tape gag. Her elbows are tightly bound after which Mr Big Boss takes a bit of a grope interlude before moving along and binding her arms tightly to her body with a few more rope cinches. With the ropes in place he adds blue electrical tape around her head increasing the tightness of her gag much to Sahrye’s obvious dismay. Two more leg ropes are added and Mr Big Boss deems her done and takes a couple of phone photos to commemorate the bondage. After a few gropes he takes his leave leaving a bound and gagged Sahrye struggling in the corner trying her best to put on a good display. Tape Gagged Stacey Bound and Plastic Wrapped in the Basement