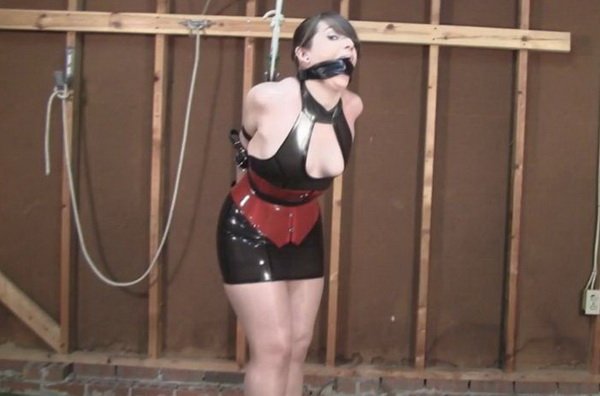 Elizabeth, dressed in a tight latex dress and waist cincher finds herself quickly bound at the elbows and wrists with leather straps before having a large leather pouch gag shoved into her mouth. After it’s strapped behind her head, a body strap and ankle strap are added to her bondage which elicits some moans due to a balance quandry. Elizabeth is then attached to a pulley which is used to pull her arms up in the air and her body taut. She’s given a few swats to the ass and her captor leaves her to struggle and moan. Eventually after a long struggle he returns to add a rope to her hair pulling it back and tying it off to her ankles. A few minutes of that predicament and the man returns only to tighten the hair bondage which has slipped a bit and pull it back forcing the leather gag deep into poor suffering Elizabeth’s mouth. She’s then left a final time where she rotates trying in vain to find a position that is tolerable.