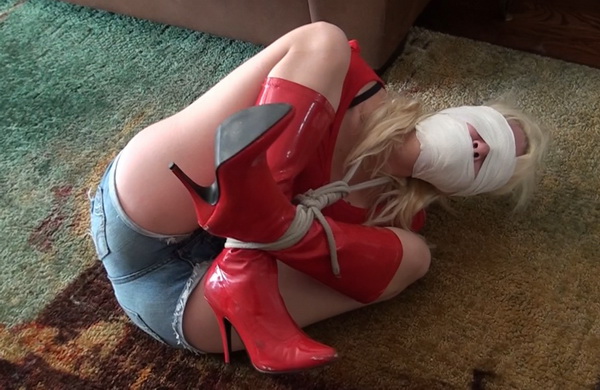 With her elbows fused together helplessly behind her back, tightly gagged and blindfolded pretty blond Sidnay Adams is carried over the Hunter’s shoulder through the house. He brings her to a bedroom in the back and drops her onto a futon. Sidnay struggles helplessly as he ties her booted ankles tightly together. He leaves her bound, gagged, blind and helpless struggling on the mattress. But Sidnay doesn’t give up although it seems hopeless. She reaches out with her nibble fingers trying to feel from the knots on the ropes binding her ankles together. It is tough work trying to pry loose the tight not with numb fingers but she purseveres and soon is able to kick her booted ankles free from the ropes. She struggles off the futon but now what? She is totally disoriented not knowing the layout of the room or the house she crawls along on the floor reaching out with her booted feet trying to feel around looking for the door. After a frustrating struggle she finally finds the door way and scoots along the floor into a hall way and into the living room. She still has no idea where the door to the outside is but it is her only hope. But her luck runs out as the Hunter returns and grabs her. Sidnay screams and cries into her gag as he sits her on the floor and crosses her ankles spreading her knees wide apart and binds them together. He has more rope and ties a rope from her crossed and bound ankles and runs the ropes over her shoulders to her bound elbows. He pulls her into a tight little ball and flips her over onto her side. Poor Sidnay sobs and cries into her gag struggling helplessly in the tight ropes. All hope is lost as she starts to panic with her whold body shaking in terror. 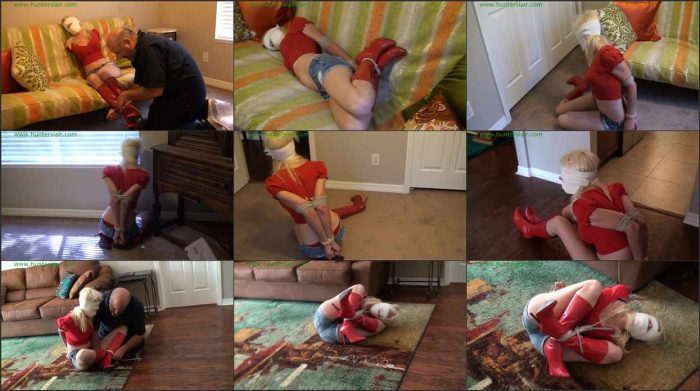 Natalie Charm – Nosy reporter gets too close to the story & ends up a bound sex slave, jimhunterslair