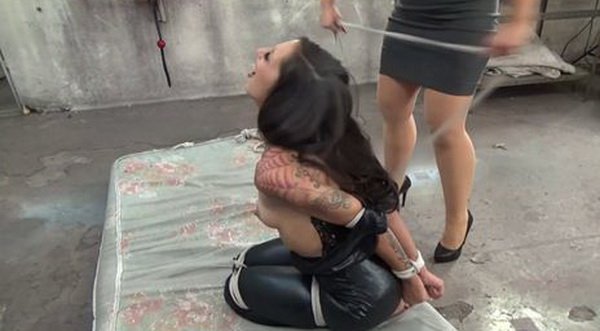 Secreet agent Stefania Mafra goes out to observe and take pictures at an abandoned industrial building. Minicam ready, she checks under a dirty mattress on the floor, but finds nothing, when she hears a door closing. The pretty Brazilian sneaks to the stairs where I surprise her from behind and bring her to the mattress. Her arms are tied behind her back and her jean clad legs are tightly tied. I ask the hot girl who she is working for as I tie her ankles together. The sexy sleuth won’t tell me anything so I gag her with several pieces of electrical tape. I unzip her shiny catsuit and out pop her perky small tits. I ad a nice chest harness, but stefania isn’t amused. I force the bitch to lie down and I hogtie her and take some thin string and tie her big toes together. I tell the dumb bimbo that she will talk or regret it. I remove the tape giving her the opportunity to talk, but Stefania refuses to tell me what I want to know. I ballgag her and rub oil on her feet. I laugh as I insert matches between her bound toes and threaten to light them. Finally Stefania panics and decides to cooperate. I leave the room and before I realize it, the sneaky ethnic girl has untied herself and gotten to the door trying to get back up. I crotch rope her and drag her backwards into the room Stefania is tied up again with a new chest harness and I put her into an even tighter hogtie. Then I tie her big toes together really tightly. Poor helpless Stefania wriggles her feet like hell, but this tine she in unable to escape. I leave her hogtied and toe bound struggling and cursing into her gag.