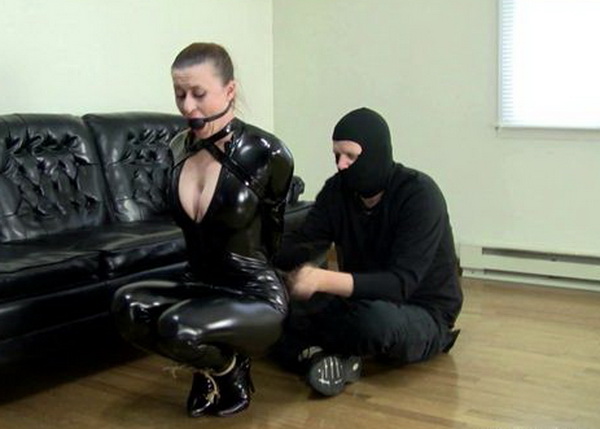 Serene is sitting on the couch when suddenly a loud noise catches her attention and directs it towards a masked man who hands her some clothing and forces her to strip. Once shes out of her regular wear the man forces her to put on the catsuit and shiny six inch heeled boots and then after forcing her to stand zips her arms into a shiny leather armbinder and then experiences a bit of hand gagging before the man goes off, grabs a black ballgag, and shoves it into her mouth. A bit more handgagging follows till eventually the man leaves her to struggle standing in her shiny catsuit, boots, and armbinder. When the man returns he binds Serenes ankles together and then after she does a squat on her own gets the idea to bind her armbinder down to her ankles forcing her into a squat position. He then leaves her to cruelly get tired in her thighs in her super high heels and bondage. Serene eventually figures out how to maneuver and she gets herself down onto the ground where the position becomes a far more manageable hogtie.