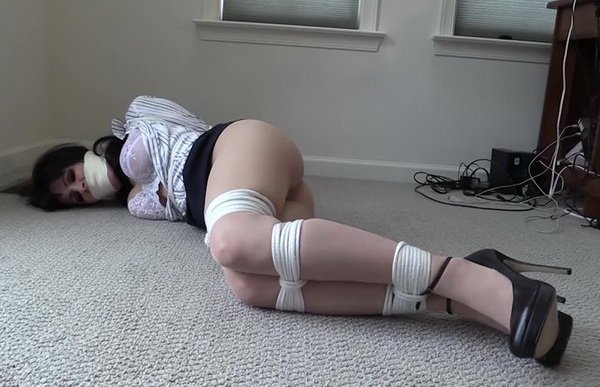 He is some kind of spy sent to this office to steal some top secret documents. But as he tries to get into the computer, he realizes that he doesn’t have the correct password and there is only one person who can give it to him. That is Hannah Perez, the secretary who he has gagged and zip tied to her desk right at the man’s feet. So after cutting her loose and removing the gag, he makes Hannah give him the code he needs. Then after he sees it works and he is able to access the files, he goes back to Hannah and gags her again. When he gets the files he needs to start downloading, he finds out t could take up to an hour to transfer them. So he needs to secure his captive better. Using rope the man ties Hannah up completely. To make her more quiet, he tapes her sock stuffed mouth to gag her again. After leaving Hannah to struggle bound and gagged for some time, the man comes back to find her skirt has risen all the way up to her hips and guess what, she is not wearing any panties under her sheer pantyhose. The man makes her situation even more embarrassing when he pulls her blouse open and her bra down. Sometime later, long after the man has left, Hannah’s co-workers will come find her hogtied, crotch roped and gagged with her tits out. 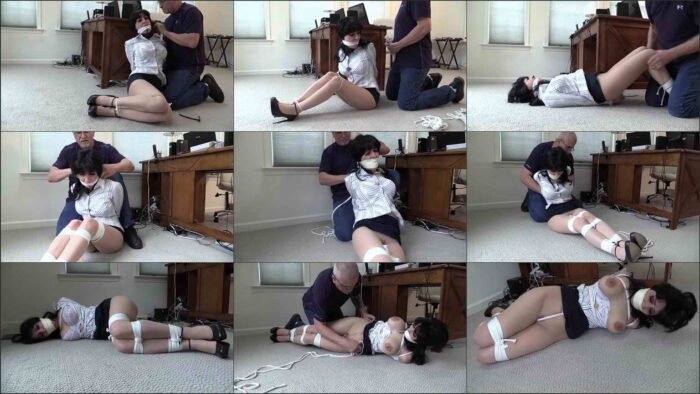 Bound and Gagged Hannah Perez and Elizabeth: You’re not going any where