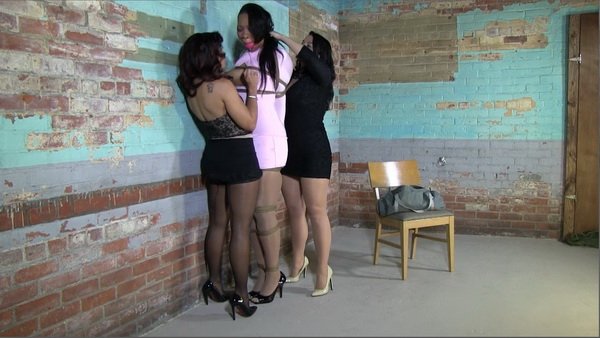 Sass finds herself bound in a chair with a huge ball in her mouth. She works as a stripper. She was bragging about all her money and showing off all night long. JJ and Sahrye were patrons there. Sass was teasing them and making all kinds of promises. She didn’t have an escort to her car so they grabbed her to rob her and humiliate her. Sahrye enters and ties up her elbows and talks shit to her. She stands her up takes her to the wall and gropes her. JJ enters and ties her up more. They regag her with a sock and vetwrap. They get her to the ground and watch her squirm around and then hogtie her and tape panties to her pretty face. They taunt her more and then run off with her designer purse, her cash and he dignity. That is right, you aren’t the boss of me anymore & I’m getting revenge!

Patriot girl’s bed room ambush, to be tied up from Badd Kitty