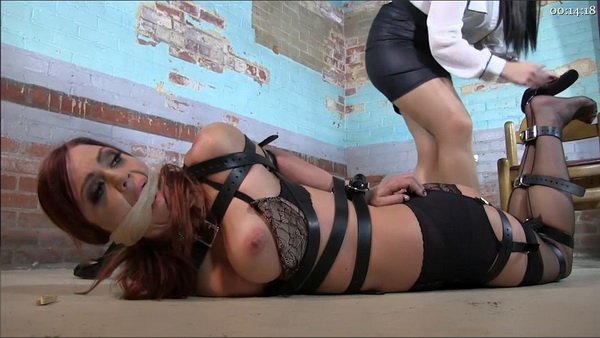 This was the very first clip I shot of Sarah that day. She has done a lot of damsel in distress so even though I said this was consensual she was still pretty damsel like, but given the nature/ difficulty of the positions it works of course. Usually I would pull the garter belt up to the waist when a girl comes out with it on her hips, you know- traditional style however I thought I’d give this more recent trend a try.Do you like this more youthful way of a woman wearing a garter belt guys???? So Sarah has already been bound up in a strappado, leg spreader and leather gag. She struggles before I come in and add some rope making it more difficult to move. She gets nipple clamps too. Her position is changed (NOT SHOWN) so that she is standing straight up with a harness gag in a chicken wing, her nice little figure on display for us. Eventually I set her down in a chair, change out her gag with stuffing and a pretty mean cleave- which she wears well. Then she is hogtied TIGHTLY with a rubber strap and duct tape is added to the gag. She is a pretty hard struggler, she ripped the strap! No fear I got out a leather one and put her in the same situation until I could tell that she was absolutely miserable. The clip cuts to her coming out of the hogtie strap- such relief, then the gag coming off.