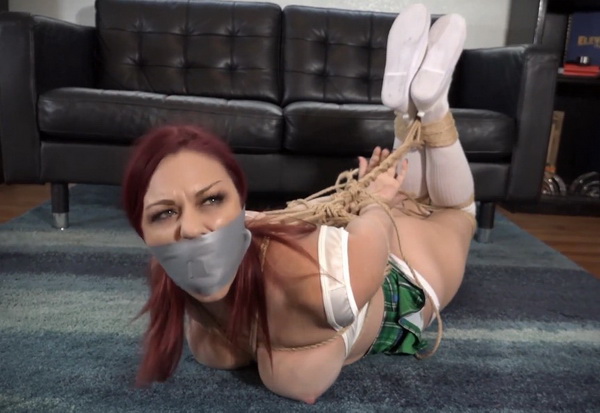 Sarah is just relaxing on the sofa when Jeff enters the room. Is it playtime already? Jeff tells her he wants to tie her up. Not that they haven’t been doing it before but Sarah really needs to get to a gig. Sarahs wrists, ankles, knees and boobs get tied. She keeps on complaining on how this affects her reputation and name but Jeff doesn’t care about it. He stuffs a ball into her mouth and gags her with duct tape. Her boobs are taken out of her top and she is left alone. She struggles to get out of the strict ties but the ropes doesn’t seem to get loosened. Sarah is now really putting a effort in getting out to get to her gig. Every sounds she tries to make ends up in MMMMPPPPHHHHH. Jeff returns and puts Sarah on the floor. WHAT NEXT!?! She is put in a tight hogtie to be sure she won’t escape. When Jeff is done he leaves Sarah to struggle and try to get out of the ties. Sarah now even more restricted pulls the ropes put the only seem to get tighter.. Now she is really DONE with all of this and MMMPPPPPHHHSSSS even harder but it doesn’t matter the gag muffles all the sound she makes.. Is Jeff going to release her soon…? Eden Wells bound and gagged with panties and taped tight