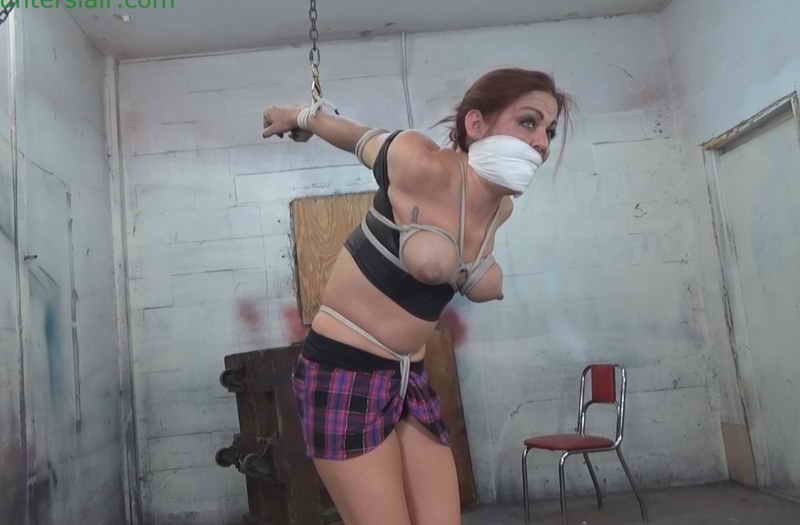 As the sedative cleared from her brain pretty redhead Sarah moans and her eyes open. She tries to move her arms when she feels the brutally tight ropes biting deep into the soft flesh above her elbows. She looks around and finds herself locked in a small cage looking out between the bars. Her elbows are crushed tightly together behind her back. She screams and cries for help looking down to see that someone had taken her clothes and dressed her in some slutty school girl outfit with stiletto boots. She kicks at the side of the cage and reaches for the padlock in a desperate attempt to free herself from the cage. She grabs the padlock but without the key she is trapped. She kicks at the sides again and screams and cries in frustration when she notices a string hanging down outside the bars. Sarah twists herself around in the cramped box and stretches her fingers up to try to grab the string. She loops the string around her finger and pulls, her hope is renewed when she finds a set of keys at the end of the string. Maybe she hopes one of the keys will fit the padlock and she can escape the cage. She twists and turns again trying to get her hands with the keys around to get to the lock. The ropes cut deep into her elbows as she grits her teeth in pain trying to get the key into the padlock. But then she hears someone approach and looks up to see a masked brute standing over the cage. She tries to hide the keys but he grabs them from her hands and unlocks the cage. He grabs her by the throat and pulls her from the cage. Sarah screams and begs as he reaches into her pocket and pulls out an old rag. He stuffs the rag into her mouth then seals her mouth shut with tight wraps of elastic bandage wrapped tightly around her head. The brute then grabs her tits and pulls one of them out of her tight crop top before pulling her wrists together then ties them tight in rope and drag her over to a chain hanging down from an overhead pulley. He attaches her bound wrists to the end of the chain then cranks her wrists up high behind her back. Sarah sobs and cries into her gag as he grabs and gropes her. He then leaves her alone to suffer in the tight ropes. Sarah twists and turns in the bondage in a desperate attempt to free herself but it is hopeless. The masked brute returns with more ropes and ties a rope around her tiny waist then pulls it down between her legs and buries it deep into her panties, splitting her pussy and ass in two. She protests, screams and grunts into her gag as he pulls her tits out of her tight top then wraps ropes around her chest, above, below and between her tits. She watches helplessly as her tits are then tightly bound with ropes wrapped around the base of her tits like a tourniquet until they begin to swell and bulge. He bends to bind her booted ankles tightly together then cranks the winch up higher, lifting her wrists up higher behind her back and twisting her shoulders painfully in their sockets. He tell her that he is going to leave her like this for a while to break her spirit. Sarah screams and begs into her gag as he departs leaving her painfully bound and gagged. 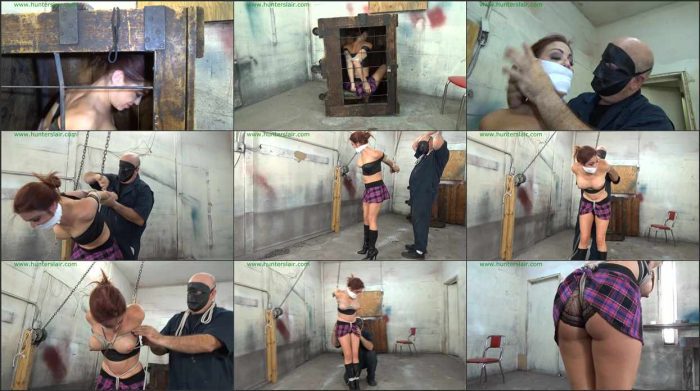