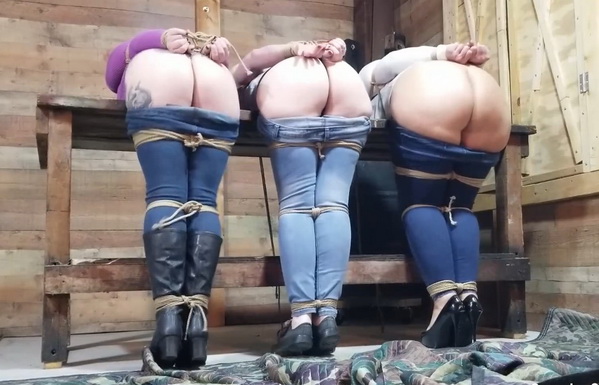 A Trio of Tight Jeans and Tight Ropes – Part Three – Distressed Denim Damsels Displayed Derriere!
After wrangling three denim-clad, curvaceous captives into his hideout way out of town where not a soul comes by – take a look at Part One and Part Two! – the strong armed aggressor adds their final tethering; their necks are tied tightly to his workbench, collarbones pressing against wood, there are not many ways for these damsels in distress to dare struggle… A peachy predicament, bent double, butts on display in skin tight blue jeans, until their pants are pulled down exposing bare ass cheeks and a tiny thong, wide-eyed faces grimacing into bandana cleave gags. Such delightful derrière’s on display, who could resist a grope? A squeeze of soft flesh, PAWG MILF cheeks from golden tan to creamy shades. Limited by their hemp hindrances the trio of voluptuous vixens attempts to show their displeasure, stamping feet – in knee high boots, sneakers and high stiletto pumps – secured by tightly tied ankle ropes. Their ordeal is not over yet, as their harasser begins to remove his belt behind them… 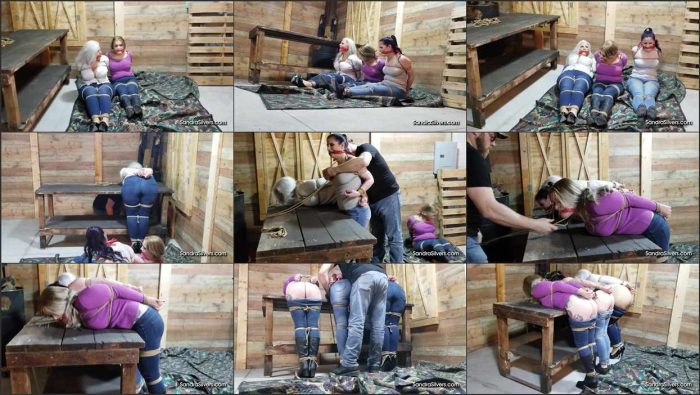 Sandra Silvers with a cameo from Whitney Morgan – Damsels in Denim, sandrasilvers

Secured to Steel, Sandra Silvers Suffers Beautifully in a Head Back Hogtie, Harness Gag and Pantyhose