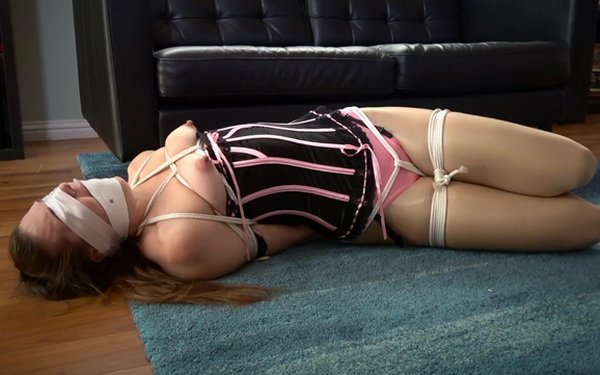 Sexy Sadie Holmes is home alone in the sorority house and decides to try on some of her sister’s silky lingerie. She loves the way it looks and feels against her skin. She wants to take some photos of herself before the sisters all come back from the big game, but she can’t seem to find her phone. As she is posing in front of the window, a frat boy catches a glimpse of her. He always wanted to try a “panty raid” or something of the sort, so he sneaks in through an open window and grabs her! Sadie screams with fear, but he puts his hand over her mouth and wrestles her down to the couch where he begins to her her wrists behind her. “NO! What are you doing to me?!” she exclaims as he wraps more rope around her body. His friends at the frat house are never going to believe this prank! He gags her so she doesn’t attract any unwanted attention to him. He sits her on the ground, crotch ropes her, ties her legs together. He pulls off her stockings and sees her beautiful feet covered by shiny nylons. He cuts them them at the toes and peels them back to expose her gorgeous soles. He hogties her, blindfolds her, and pulls down her top, fondling her breasts. Sadie struggles to get away from his hands, but she is tied too tightly… 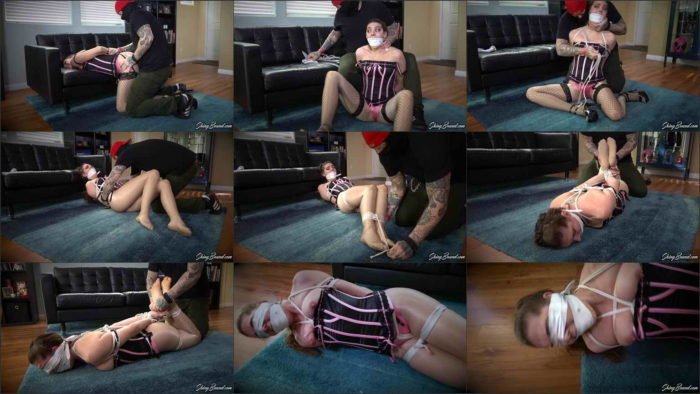