Sorority Scout Rosie was selling her cookies door to door when she knocked on the home of the wrong man. He had a sweet tooth, to be sure, but found the pretty little thing much more appetizing than a box of old cookies! After inviting her in, he stripped her of her top, tied her to a chair and let her thrash and struggle as he enjoyed the spectacle of her lithe, writhing body fighting for freedom! He loved the site of her tiny pink panties shifting as she squirmed in her bonds, and he was most pleased with the way her sobs and tears were swallowed by the ball gag strapped into her mouth! Even the pain from the clamps fixed to her nipples couldn’t make her scream loud enough to be heard! Soon, she was transferred to his bedroom, bound spreadeagled on the bed as he cut of her stockings and packed them into her mouth before cleave-gagging the helpless young beauty! Now wearing absolutely nothing, she fought to close her legs and preserve her modestly, but the ropes held them wide open, leaving him free to ogle her cute little pussy! Finally, he removed her gag, and the girl begged for release, but the man simply packed a big rag in place before taping her mouth shut. He had BIG plans for that body, and he needed absolute silence! 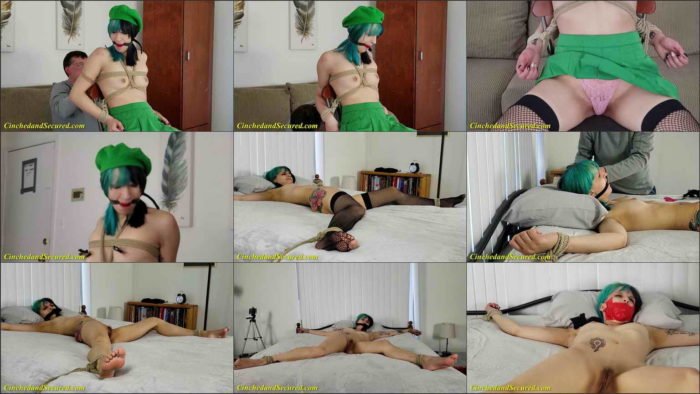