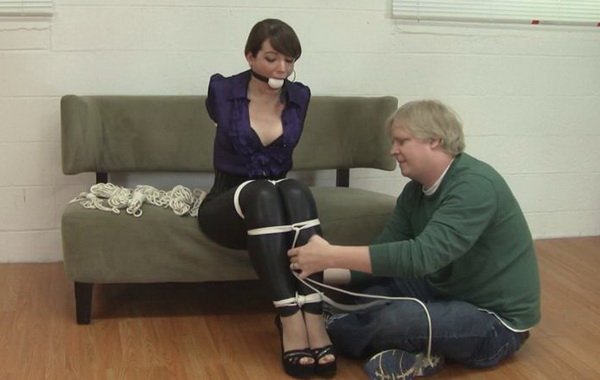 Elizabeth recently had a fan who wanted to give her a ballgag of her own choosing. She’d had her eye on a white single strap ballgag for quite a while and that’s where she chose her gag from Oz Bondage. She had it on the couch with a lot of rope and when David arrives he notices this and gladly accepts her proposal that he tie her up in order to test the gag. After commenting on how large the gag is he picks up some rope and binds her elbows, wrists, and then her forearm tightly together. With her arms bound he grabs the white ball and shoves it into her mouth which starts her moaning and drooling in earnest. A couple of quick phone shots and he grabs some more rope while Elizabeth drools uncontrollably. She seats herself on the couch and David starts binding her wedge heeled feet together completing her as a helpless package. Not one to let that simple fact stop him from adding more rope he takes two more ropes and binds above and below her knees on her leather pants. With those ropes added David tells her that he’s going to leave her there for an hour or so to really test the ballgag out before taking his hand and wiping her face with some of her drool. He seats himself on the ballgag beside her and she starts playfully trying to run away. Ring Gagged and Hogtie Mina in a Silver Bodysuit