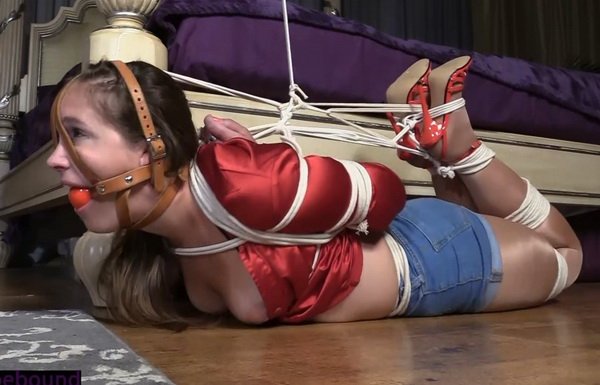 Ms Adams has always wanted to be a star. She has only gotten small parts and commercials. Then she hears about a potential roll as Daisy Duke, she is delighted and comes dressed in a knotted satin blouse, signature short shorts and the glossiest tights. She meets a woman in a hotel room and instead of reading for the roll she is told the most important aspect of this particular Daisy is that she will need to be tied up in the movie, sex sells after all and we all know there are plenty of people into bondage. Rachel Adams willingly allows herself to get tied up but it is much more than the wrist ties and single piece of tape shown in most movies and tv shows. Rachel is ballgagged and put into a balltie. She handles it well and hopes that she has proved herself worthy of the part, but it is not done yet. The woman explains that Daisy will be tied up for extended periods of time and often and they need to try something else. Rachel agrees. A harness gag goes over her head and then she is tightly hogtied and struggles around to show off her acting skills. Then she is pulled over to the bed post and a rope is added to her bondage tying her off to the bed post so she can no longer roll from side to side. Her arms are still in a reverse prayer position after all this time. When she thinks it is finally all over and the ropes are coming off the woman cuffs her and makes her stand up and lean over the bed. She runs her hands down her shiny pantyhose clad legs and tells her that she is actually under arrest for fraud and this was all a set up. She is terribly confused…..finally the woman tells her that it was a test to see… Diamondly Kink, Little Red Girl and JJ Plush – Maid, to be tied up