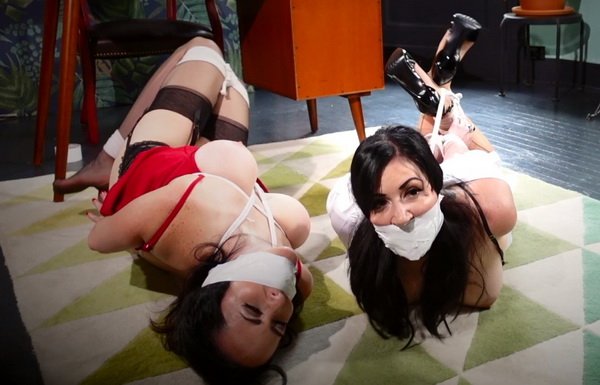 Nyxon has been having an affair with her boss (Nate Liquor), but when his wife (Tina Lee) surprises him with dinner at the office when he’s “working late”, all Hell breaks loose. Nyxon ambushes Tina & spills her & Nate’s evil plan to run off together. Nyxon begins to tie Tina’s arms behind her back, and Tina tells her to fuck off. Nyxon pulls Tina’s panties off of her, and shoves them into her big mouth, securing them in with white duct tape. She finishes off Tina’s tie as Nate walks into the office, and Nyxon cackles as Tina screams through her gag. But, unfortunately for Nyxon, Nate has other plans. He places his hand over Nyxon’s mouth, and her eyes roll into the back of her head. He lays her down on the floor & gets busy tying her up. When Nyxon opens her eyes she screams & Tina tries to kick Nate. Just like Nyxon did to Tina, Nate removes Nyxon’s panties & shoves them deep into her mouth. He finishes up Nyxon’s tie, and leaves to get some things together. The girls struggle & yell at each other through their gags, and they even try to help untie each other. Nate comes back into the room, and slams Nyxon’s elbows together behind her back & puts her into a tight elbows to ankles hogtie. He removes Tina’s heels revealing her full fashioned stockings, then places her into a tight hogtie as well. He then tells the girls goodbye & heads out leaving both ladies struggling on the office floor. 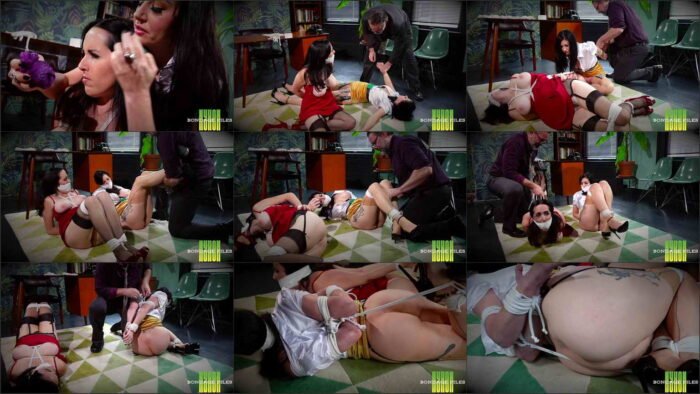