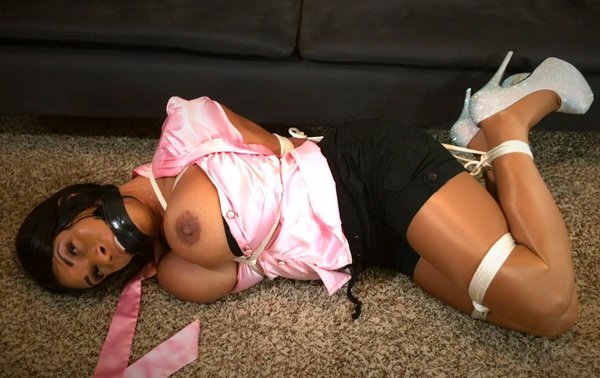 Dawn has been fucking up at the office lately, and her boss Nyxon has had enough. It’s time for more drastic measures of punishment. So, she calls Dawn into the employee lounge & explains what’s going to happen to her. She sits Dawn down on a little chair & begins to tie her legs tightly with rope. Dawn tries to bargain with Nyxon, asking if there’s a different punishment for her, and Nyxon responds by tying Dawn’s elbows tightly together. She then takes a white rag, shoves it into Dawn’s mouth, and wraps 2 inch black electrical tape around her head to make sure that she doesn’t spit it out. She then tells Dawn that she’s going to leave her to struggle while the other employees come in to take their break. Nyxon leaves, and Dawns struggles her way onto the floor. She rolls around for a bit, trying to untie some knots, but she’s unsuccessful. Nyxon comes back in, and tells Dawn that since she’s on the floor, it’s time to put her into a tight hogtie. She then leaves Dawn to struggle & to think about how she can become a better employee. 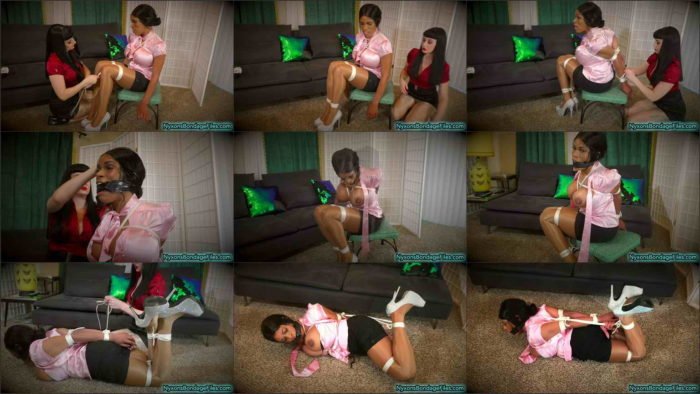