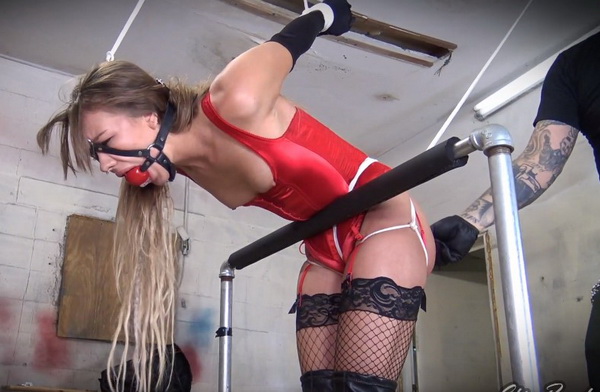 After spending time bound in the suspended cage (Naomi Swann The Cage), gorgeous Naomi Swann bends over the bar and waits for what comes next.. Shiny ties her up in a strappado predicament with her hands and crotchrope connected to the electric winch and hoists them up until theyre tight. Now any pulling on her hands will definitely tighten that already insane rope pulling in her wet pussy. Next he gags her with a harness ballgag and attaches it up to the hoist as well. Now bent over looking forward with arms way up and out of his way, Shiny puts on his leather gloves and begins warming up her ass with some leather-handed swats. Naomi drools over her ballgag and moans with ecstasy.. Every time he hits her, the crotchrope also jars her from the inside. Once her little cheeks begin to show some color, Shiny picks up his silicone paddle. WHACK! Naomi lunges with eyes wide open. This paddle packs a serious punch! He alternates between her cheeks, giving them equal attention.. When he’s finished, poor Naomi is a drooling mess. She thanks him as he lets her down and removes her gag.. He’s not quite finished with her though.. He’s going to round out her experience with a beautiful bound orgasm with the vibrator (In the next video Naomi Swann Crotchroped and Cumming). For now tho, while he sets up, he leaves her kneeling on the ground, painfully backarched, with her head harness tied back to her crotchrope.. 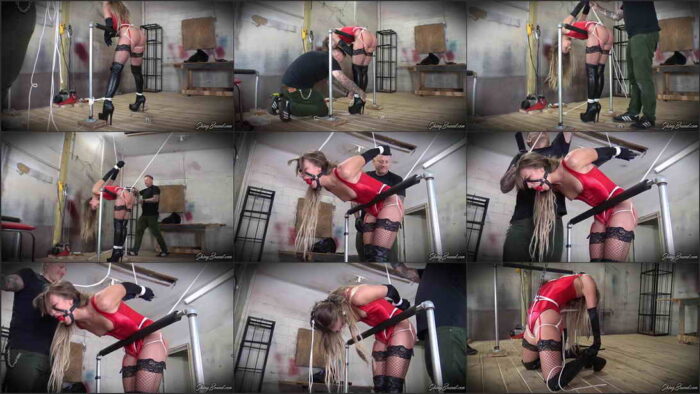 Shinybound Nadia White.. Hung By Her Pussy and Vibed