Home » Bondage M/F » Nadia White – Pulled from the trunk and introduced to his Lair, jimhunterslair 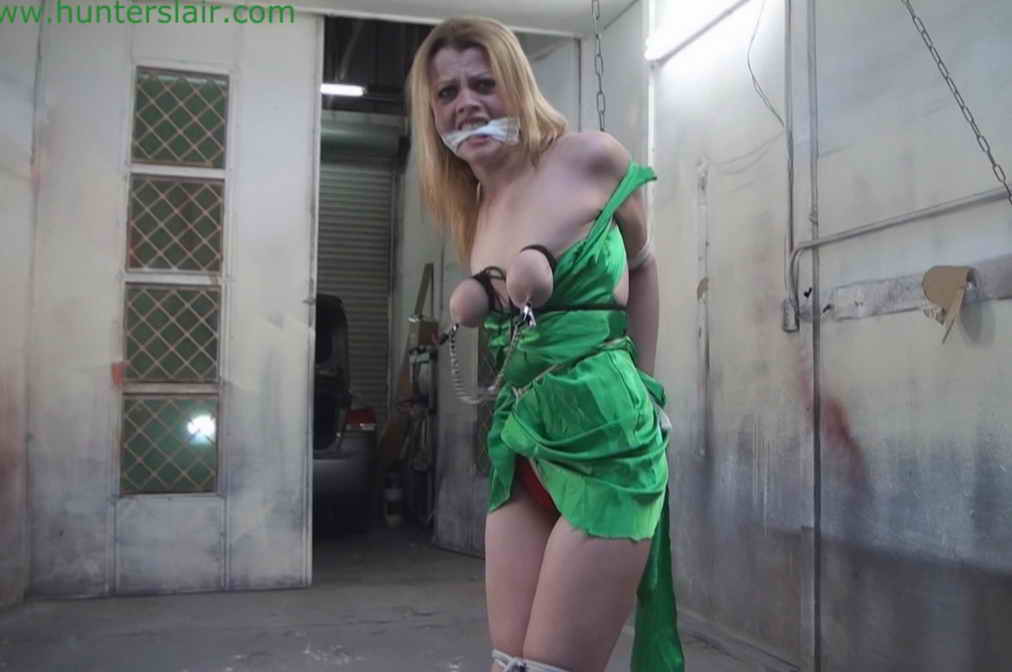 Sexy blond Nadia wakes up in the dark feeling the rocking of the car as she softly moans into her gag. She can feel the tight ropes cut deep into the soft flesh around her elbows and wrists welding her forearms tightly together behind her back. She can feel more ropes around her slender ankles and knees locking her long lean legs tightly together. Feeling claustrophobic she beings to panic and screams and cries into her gag, she kicks at the trunk and pulls desperately at the ropes in a futile attempt to free her arms. She hears someone approach the car and hears the latch pop and daylight streams into the dark trunk. She looks up to see a hulking masked man stand over her and he reaches into the trunk and grabs her ass cheeks exposed beneath the hem of her satin dress. She protests into her gag and tries to roll away. But her grabs her and pulls her from the trunk. Nadia sees she is in a large garage bay with tools and debris laying everywhere. The thug then her to start hopping on her bound stiletto heels, she is lead through a large door opening and hopped over to a filthy table where he pushes her chest down on the table top and walks away. Nadia watches him in dread, she wants to run away but with her arms totally useless and her legs cruelly bound together she has nowhere to go. He pulls a chain down from an overhead pulley then comes back to Nadia and pulls her back to her feet. He then hops her over to the chain and attaches the chain to her bound elbows. She screams in pain into her gag as he cranks a winch on the wall pulling her elbows up high behind her back. Nadia struggles to balance on her bound stiletto heels, thinking that if she falls she will rip her arms from her shoulders. He grabs more rope and ties it around her tiny waist then pulls the rope down between her legs and spliting her pussy in two with the rope pulls it up her ass and feeds it between her bound wrists. The rope is pulled tight and then pulled back down between her legs splitting her pussy again and ties it off at her waist. He returns to the winch and cranks the winch pulling the chain higher. Nadia scream in pain into her gag as her elbows are pulled up higher behind her back, and with her wrists tied to her crotch rope as her elbows are cranked higher the crotch rope buries itself deeper and deeper into her pussy until she feels she is about to be split in two… 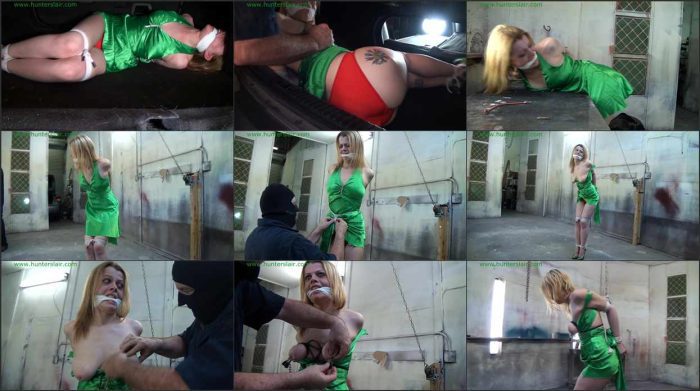 Sidnay Adams – Booted blond dangles at the end of a chain with her tits bound in twine, jimhunterslair