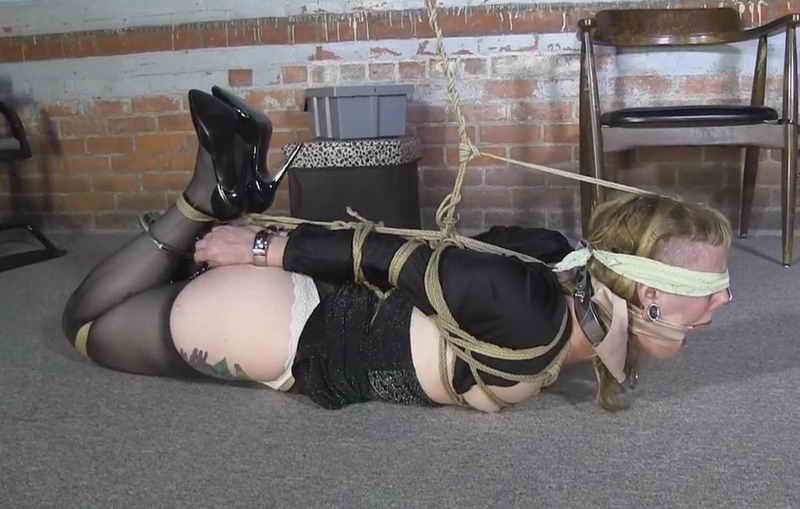 Lean and leggy blond Moxie got hired for a porn gig and after the shoot decided to steal a pair of antique handcuffs that said San Quentin on them. She thought she could make some quick cash selling them on ebay. Obviously she didn’t think she was paid enough for her performance. One of the guards catches her and it turns out she has been in trouble with the law before so she decides to play a little game instead of having the cops called in. He makes her put her hands up on the wall, cuffs her with rigid cuffs, puts leg irons on her while she is wearing 6inch pumps and puts a choker collar around her neck. He walks her back to the holding cell and leaves her there for JJ. JJ comes in and the witty young woman thinks she is going to get out, but her ordeal has just begun. JJ adds rope to her, a ballgag and actually ties rope through her earings and down to her knees. JJ tells her to get up to try to walk. She can’t walk like this and her boobs are killing from the nipple clamps. She starts to cry right away…JJ feels a little bad and lets her sit back up and walks her out of the room tied at the knees wearing the ankle cuffs and leads her across the room. She ties her off to the ceiling above and adds more rope to her, tying her elbows together and using the girls bra to gag her. She rips open her black pantyhose so her nice ass is exposed. She gets a crotch rope is told to get on the floor and purple vetwrap is wrapped around her already lousy gag. Her ankles are pulled up into a hogtie position so she is in a knee point hogtie on the ground. Twine is added to the tweezer nipple clamps and they are tied off across the room. She is crying pretty hard again. JJ feels a little bad for the pretty girl in tears and lets her out of that position, just removing the bra gag and putting a pair of really big pink panties in her mouth and wrapping her head with ace bandage as a cleave and putting her into a traditional hogtie on the floor. She gets nose hooks, and tied off to the ceiling above and a pair of panties is used as a blindfold. The corrupt security guard is fairly certain that the pretty crying girl and her dumb haircut won’t be stealing anymore. 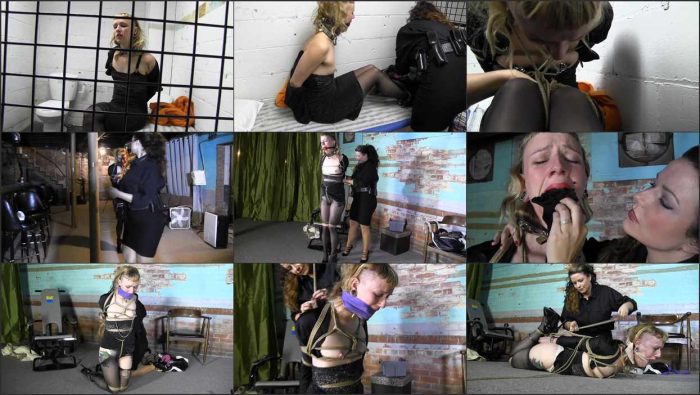 Jayda Blayze metal bondage, Bratty coed is lucky not to be getting expelled, Borntobebound

Honour May and Jasmine Jae – Teach Me To Submit! boundhoneys