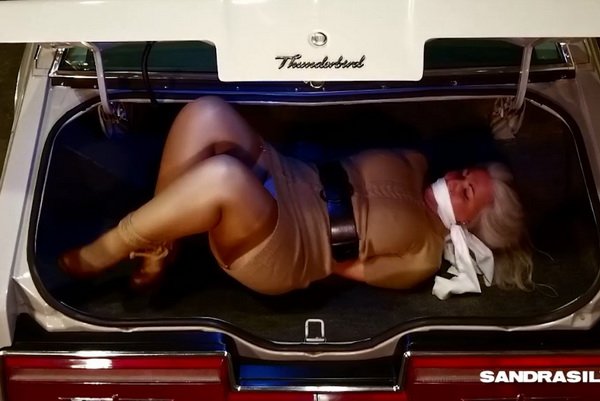 On this very special episode of “Sandra Silvers, P.I.”…Boss Carmine DeFammattori of the powerful New York City Crime Syndicate had started to branch out. He was no longer content with being the only game in town when it came to gambling, racketeering and extortion. He now had a taste for slavery and human trafficking. His client list was replete with Persian Princes, politicians and potentates around the world. Each one of them willing to pay any amount for women meeting the exact particular preferences of what they wanted in their harems as playthings. Gals of all different shapes and sizes had been disappearing from around the city all month. The police could not put a profile together and were stumped. Then a millionaire industrialist’s wife went missing. With the police being a outclassed, he turned to the super sleuth, Sandra Silvers, P.I. to find his wife and get her back.
Sandra must have gotten too close to DeFammattori’s operation… and we join our story.
The overhead door rolls up on a dingy warehouse in Brooklyn, right across the bridge from Manhattan. The sounds of the city traffic have been drowning out the noises coming from the trunk of the shiny new Thunderbird pulling in. The long sedan comes to a stop; the hulking henchman gets out and closes the overhead door. With the door closed, the faint muffled pleas emanating from the rear of the car can be more easily noticed. The henchman places a key in the lock and raises the trunk lid to inspect his cargo. Before him lies the hour-glass-figured, buxom, struggling body of Sandra. Clad in an ever-so-tight woolen, short-skirt-sweater/dress, stockings, garters and heels. Her Farrah Fawcett hairdo spilling about her gorgeous gagged face. He gives a quick look at his curvy captive. She lets out a muffled scream into her gag and looks back in terror with eyes wide… 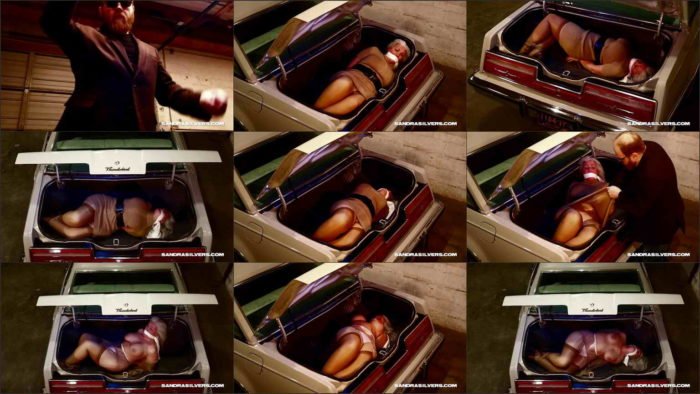