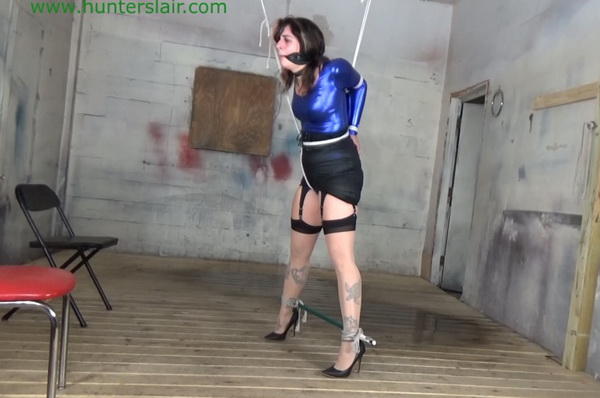 Pretty Mia struggles in the lair tethered to a chain hanging down from an overhead pulley attached to her tightly bound elbows. She cries for help but her pitiful cries are muffled by the tight black elastic bandage pulled deep between her lips. Mia twists, turns and pulls at the chain attached to her crushed elbows to no avail. She tries to kick at the remote hanging on the wall but it is too far away. The Hunter comes in to play with his pretty captive. He presses the button on the remote which cranks the chain attached to her elbows up through the pulley. Mia’s elbows are pulled and stretched up high behind her back. She screams and curses at him so he grabs some black electrical tape and wraps it tightly over her bandage gag, pulling the gag deeper into her mouth. He then ties another rope around her slender waist, the rope is pulled between her tightly bound wrists and down between her legs and up through her crotch. Mia watches helplessly as he runs another rope up through another overhead pulley then ties the end of her crotch rope to the new rope running up through the pulley. This rope is then pulled tight and tied to a eye hook attached to the wall. The crotch rope is pulled taut and slices into her pussy. The Hunter presses the button on the remote again to lift her elbows up higher. As her elbows are lifted the rope run between her bound wrists is pulled tighter making poor Mia stand up on her toes. He then grabs a spreader bar and spreading her curvy legs wide he ties the bar to her ankles. He leaves poor Mia alone as she tries to keep on her toes to prevent the crotch rope from slicing any deeper into her pussy and ass. 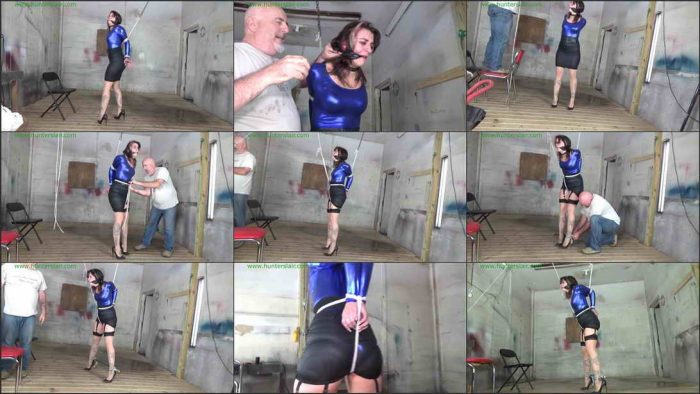 Slyyy with Gigi – Haughty debutante bound to give head, jimhunterslair