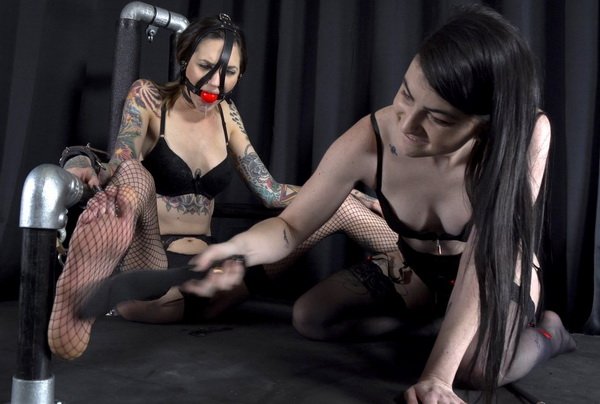 Lydia Black and Rocky Emerson – Rocky Gets Foot Punishment in Bondage. In black bra, panties, garter belt and stockings, Rocky Emerson is firmly restrained to a shiny silver bondage frame, her head held in place by a face harness, her lips drooling over a red ball gag, and her fishnet-sheathed feet ripe for taps from Lydia Black’s riding crop. Rocky seems to really like mild bastinado, as foot punishment is called. Lydia captures Rocky’s saliva in her hand, then focuses on smacking those soles with a paddle. After rubbing Rocky’s saliva all over the drooling girl’s cleavage, then it’s time for bondage orgasms as Lydia presses the Hitachi over Lydia’s panty crotch. Combining the bastinado with the vibrator action, Lydia really sends Rocky over the top as the wetness starts pouring out of her pussy as much as her lips! Rocky’s ankles tug at her cuffs and her eyes roll back as she pants her way to a climax! “Thank you,” she mumbles to Lydia over her gag… 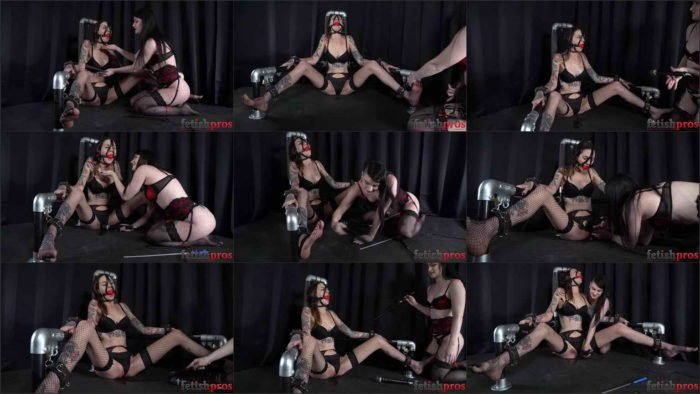