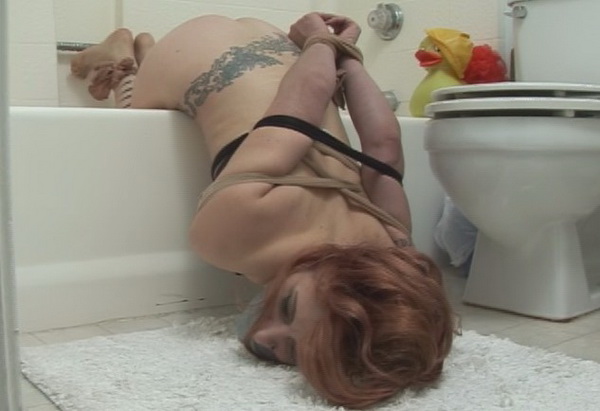 Loren is running late for work as she jumps into the shower. After she is out and dries herself off, she reaches for her panties. She realizes they are not where she left them. She could have sworn, she put them on the toilet seat just before she jumped in the shower. But they are gone. All of a sudden a man appears. He is holding the panties and several pairs of her pantyhose. “Looking for these!” he asks Loren as he shows her the panties. The man Loren to sit on the toilet seat where he uses her pantyhose to tie her up. He then stuffs and tapes her panties in her mouth to gag her. Loren is then left to struggle bound, gagged and naked in her bathroom. She struggles to get onto the floor. “Maybe I can get up and hop to the front door”, she thinks to herself. But once she is on the floor, she is unable to get to her feet. Later, the man returns and puts her in the bath tub. But Loren is able to work her way out of that too. The video ends with Loren still struggling. She knows that it is only a matter of time before the man comes back to bend her over and have his way with her. After all she is completely naked and ready for his taking. 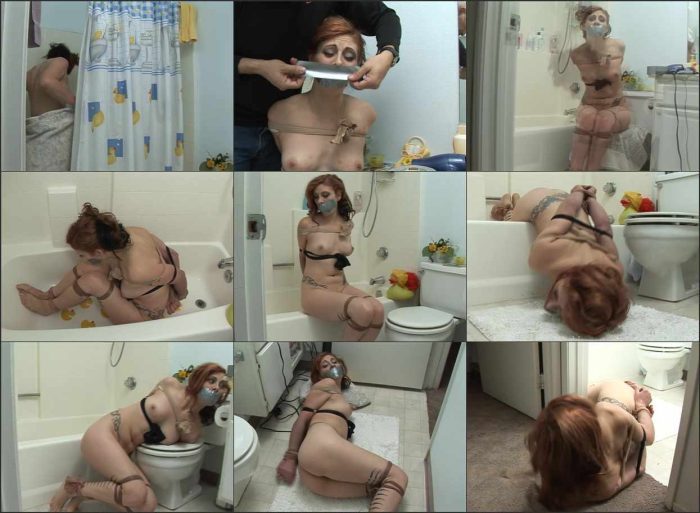 Danni Lyons – I could hear help outside! But I was gagged in a closet, oldschoolbondage

Nadia White – You have me all tied up and, if I can’t get loose, you can fuck me!

Serene Isley – Snooping cop tied up and locked in the bathroom, oldschoolbondage

My boyfriend doesn’t need to know you tied me up! Dee Williams Oldschoolbondage

Chichi Medina oldschoolbondage – Come out of that closet and tie me up!

Lindsey – Pregnant wife getting tied up and naughty with her doctor, gndbondage

Crystal Frost – Tie a gag in her mouth before someone hears her! oldschoolbondage