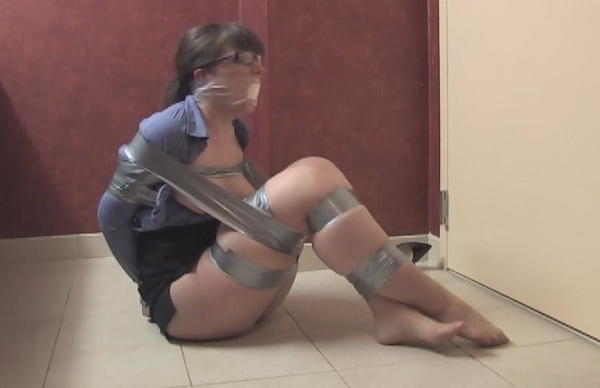 A burglar has secretary Liz Andrews into her bathroom. As he tapes her up, she refuses to be quiet. In fact, she is getting very mouthy and when the man threatens to gag her, she actually dares him to try. So after he has her hands and arms taped behind her back, the man holds Liz’s head still and shoves a pair of panties in her mouth. As Liz tries to spit them out, he stuffs a second pair in her mouth and then wraps clear medical tape tightly around her face and mouth to gag the mouthy secretary. With Liz now well muffled, he finishes taping her up. A very angry Liz struggles frantically as she tries to get loose. She rolls around on the floor grunting and whimpering through the gag until the man returns and rips her blouse open. He then uses more tape to wrap Liz in a tight ball. Now Liz finds it almost impossible to move. But she somehow works her way to the bathroom door and starts kicking it with her nylon clad feet. Sometime after the burglar is long gone, Liz manages to break the tape holding her in a ball. But it will be hours before her husband will come home to find her her still taped up and gagged with her boobs out. 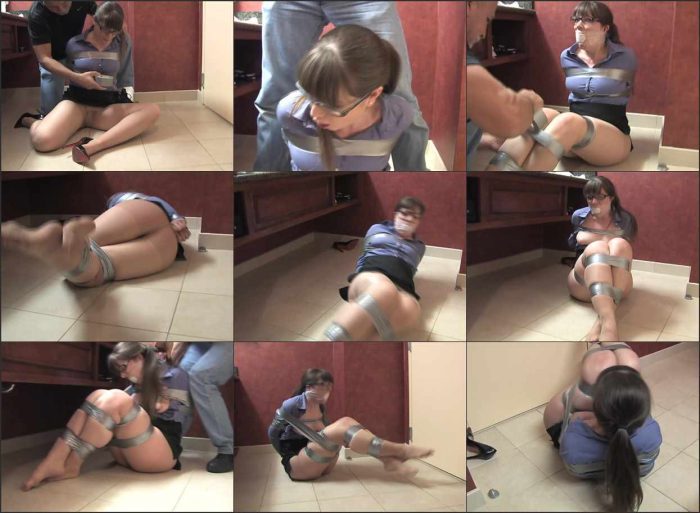 Blair Blouson Taped up and gagged! Now bend me over and get my jeans down! gndbondage

Pineapple Squirt – They kept the witness away from court, taped up and gagged, gndbondage

Natalie Charms – When he taped me up and gagged me, I knew he wanted more than pussy! gndbondage