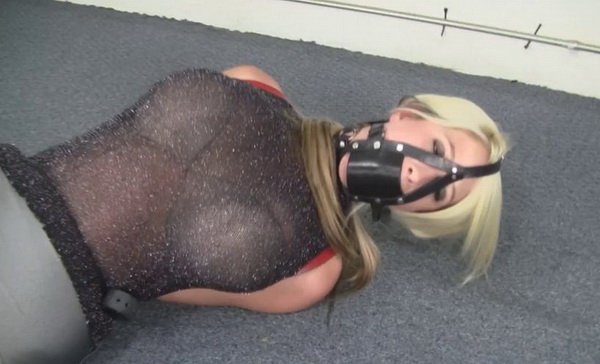 Holly Wood met up with David Andrews during her very first day as a bondage model. Dressed in a silver spandex skirt, sheer glittery top, and black wedges with shiny studs, she is introduced to leather bondage. First, her arms are slid into a ledermeister armbinder. David laces her arms tightly together as Holly shimmies into the soft leather. Once her arms are tightly encased in the leather, David makes her open her mouth to receive the ball of a Devonshire leather panel head harness gag. He buckles the straps to secure it tightly and Holly smiles with her eyes over top of the gag. She appears to be enjoying her first day of bondage modeling. Mr. Andrews applies leather straps around her waist, to pin her arms down and another to the ankles to prevent her from roaming. Once all the straps are applied, David looks at her and tells her to escape. Holly laughs behind the gag because she knows it’s impossible…