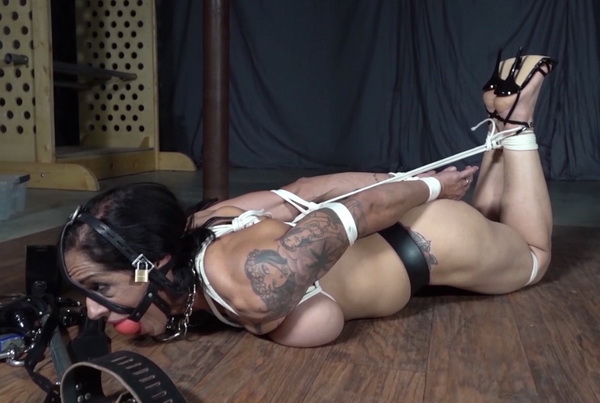 Lea has awakened to find herself on her belly on the floor, hands, knees and ankles bound. All the metal cuffs are gone from her body but still laying around the room along with all the other bondage equipment she had seen and several sets of keys, plus a pair of scissors. Besides the ropes she finds her mouth is packed with something she thinks is cloth. Her head is wrapped with a bandage of some kind and a shake of her head tells her that a strap with a padlock on it is also securing the gag in place. Another quick shake of her head tells her that the leather collar she is wearing is also padlocked on and she can see a chain going from it to a nearby pole which is also padlocked. Wow this guy really likes his padlocks. The Master enters and rolls her on her back. He then places barrel style nipple clamps on her breasts still bound with his rope from earlier. He rolls her on her belly. Her breast still swollen from the ropes press hard into the floor. The harsh clamps which he has tightened to the extreme now dig into her tender sensitive breasts. Then he finishes the hogtie using one rope to bind her elbows, wrists and ankles into a back bending hogtie. The vibrator in her pussy continues to pound away at her insides, the pain and the pleasure together both drive her wild with passion and crazy with desire. Somehow she must get free before she explodes. 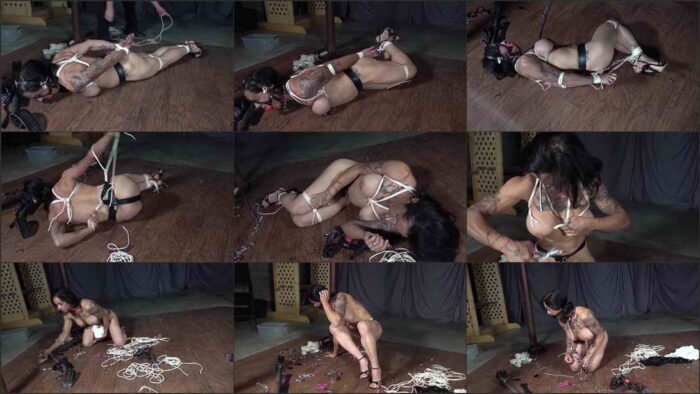 Lea Getting To Know Each Other Hogtie, lewrubensproductions

Lilith First Scene With Us, lewrubensproductions