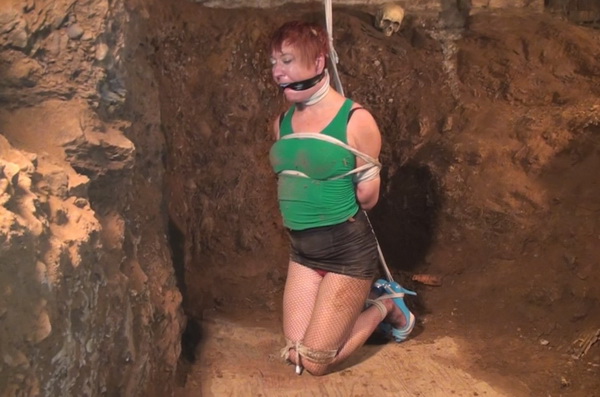 Waking up with the smell of foul earth in her nostrils Lauri struggles to open her eyes. She can’t feel or move her hands and her mouth is stuffed and packed full with the taste of oil and dirt. She slowly opens her eyes and takes stock of her situation. She is laying in a dirt pit under a wooden ceiling, she sees her legs tightly bound in ropes around her ankles and knees. He can feel tight ropes crush her arms together and realizes that they are brutally tied and twisted up behind her back with her fingers up between her shoulder blades. Lauri struggles to sit up and look around the pit to see if there is an exit. She sees a small wooden door a few yard away and decides she needs to get to the door and hopefully open it. She has no idea what awaits her on the other side but anything has to be better then the foul stench in this nasty pit. She rolls over onto her belly and slowly and painfully crawls on her belly inch by horrible inch. The smell of rotten flesh fills her senses as she fights to urge to vomit, choking down the bile that runs up her throat. She finally gets to the door and screams and cries as loud as she can in frustration as she realizes that laying on her belly there is no way to open the door. She is too weak now to try to twist around and use her feet. Then she hears something on the other side of the door and looks up as the door opens to see the Hunter. Her grabs her and drags her back into the pit. He gets more rope and pull her up onto her knees and runs ropes from her ankles up to the ropes crushing her arms together behind her back. He then ties a rope around her throat and tethers her neck to an overhead ring mounted on the ceiling. He leaves her there struggling on her knees sobbing and crying as she realizes that all hope is lost and she will remain a brutally bound prisoner down here for a very long time. He leaves the pit and slams the door leaving poor Lauri bound, helpless and alone not knowing what fate has in store for her next. 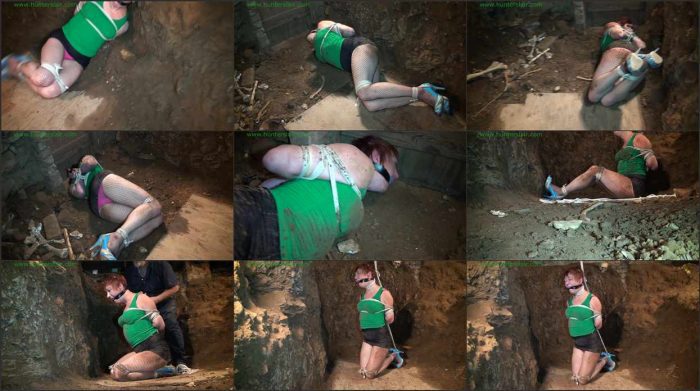 Bella Luxx – I’d love for you to tied me up in a tight little balltie, jimhunterslair

Ayla Aysel – Back in bondage hogtied in her pretty pink boots, jimhunterslair