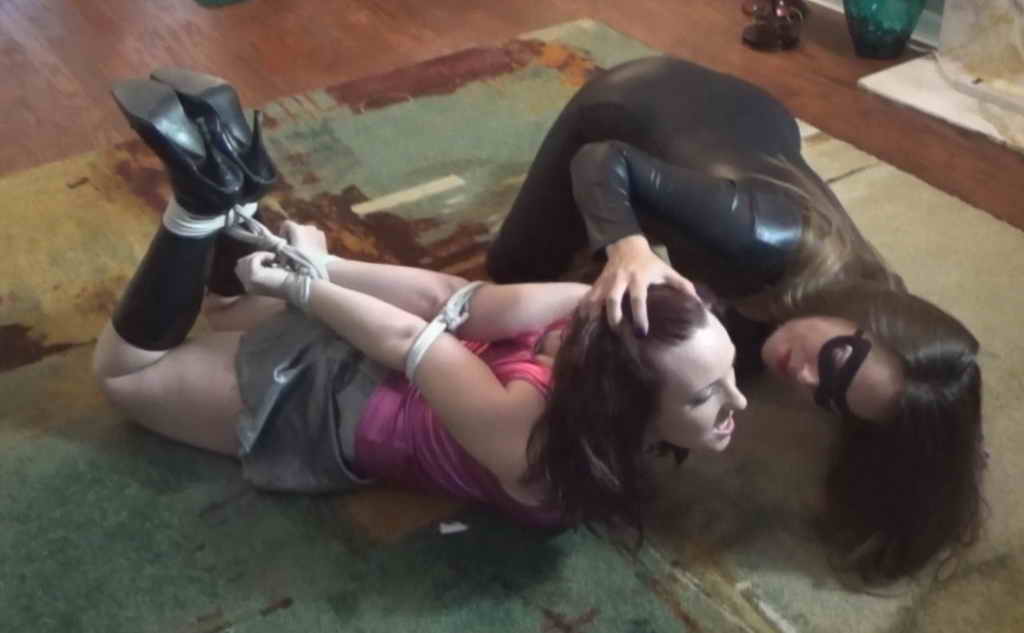 Amatuer sleuth Launa is hot on the trail of the notorious jewel thief and hear that she was planning a big heist at one of her new neighbor’s Angel Rose. Launa slipped into Angel’s backyard to try to plan a trap for the female cat burglar. But when Launa peeks through the window she see’s a woman bound and gagged rolling around in the living room on the floor. Launa rushes to the back door and finds it ajar. She rushes in to rescue her neighbor, she was too late to foil the burglary but maybe she can get some eyewitness account from Angel to give her a lead to try to catch the jewel thief before she strikes again. The poor woman rolls around cruelly bound with her elbows crushed together behind her back in ropes and more ropes tightly tied around her wrists and ankles. Duct tape has been pulled between her teeth and wrapped tightly around her head to keep her quiet. Launa struggles to untie her hapless neighbor all the while asking questions about the suspect and details about her M.O. But Angel is too distraught to think and once she is untied Launa helps her to the sofa. But little does Launa know she is the one falling into the trap. When she turns to go for help a electric shock surges through her body. She falls on the floor senseless before everything goes black. Launa awakens later to find herself tightly bound and gagged on the floor. She can feel the brutally tight ropes cut deep into her elbows fusing them together behind her back. Ropes circle her wrists and booted ankles and more ropes tether her ankles to her wrists in a cruel hogtie. She moans softly as she awakens and looks up to see a beautiful woman standing over her in a skin tight black catsuit, stiletto boots and a mask over her eyes. Launa demands to be freed and asks what she has done with Angel Rose. The pretty sleuth doesn’t recoginze that the jewel thief is really Angel Rose in disguise. Angle laughs in amusement and begins to interrogate poor Launa. She wants to know what evidence she has on her and where she keeps her files. But Launa doesn’t talk and demands she and Angel be freed. Angel stuffs a rag into Launa’s mouth then seals her mouth shut with duct tape telling her that she has more jewels to rob while the neighbors are still at work. But not to worry she will return later and they can have a nice conversation. Launa screams into her gag as the manical Angel licks her cheek with her long tongue and leaves her struggling on the floor. Launa struggles desperately in her bonds, she has to escape before the crazy wench returns. She picks at the knots holding her ankles to her wrists and soon she is able to stretch out her legs. Now to free herself from the rest of the ropes. 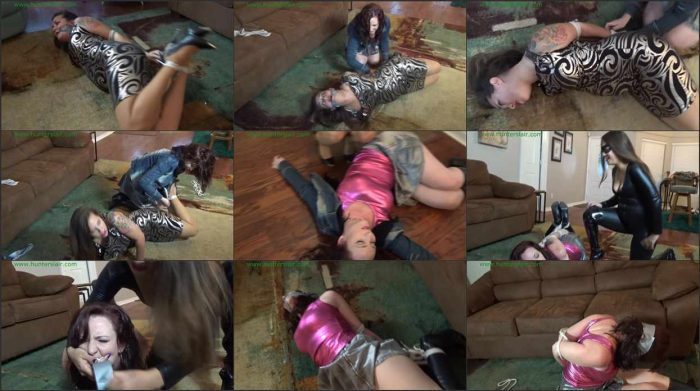 Kerri Taylor and Kelliann – There was no escape from the pyscho matron, jimhunterslair

Whitney Morgan Escaped from the trunk but still trapped in his Lair, jimhunterslair

Carissa Montgomery and Kelliann – No party for you tonight bitch, jimhunterslair

Amanda Foxx – Evil predicament with her tits bound to her knees, jimhunterslair