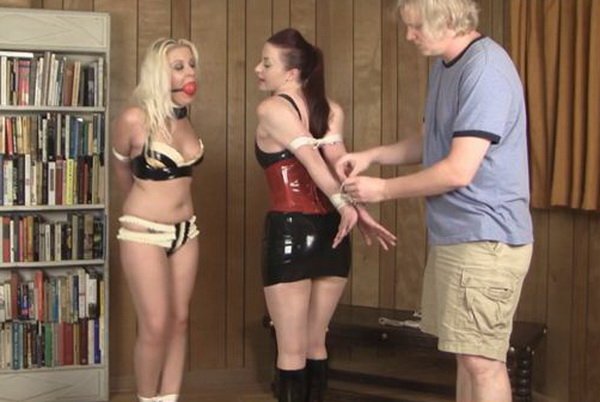 Ever since Serene went to Atlanta to check up on the offices there, she couldn’t get Whitney out of her thoughts. She wanted to go to Atlanta again to see Whitney but with her work load at the office, there was no chance to escape , except in her day dreams….
Whitney was standing in the middle of the room wearing a black and white latex bikini with a matching frill collar. Mr. Big Boss came in and started tying her up. She lavished the attention that he was giving her. She swung her long blonde hair around as she ran her hands over her latex, reveling in the feeling of the rubber under her finger tips. Once her arms are lashed behind her back, Mr. Big Boss shoves a huge red ball gag in her mouth. Her pretty painted lips make a tight seal around the huge ball in her mouth. He then ties her ankles together, showing off her tall patent black platform pumps. Wenona Roped Up and Ballgagged in Sexy Beige Ankle Boots

Tied in Heels Johannie…Roped up in Jeans and Knee Boots! HD