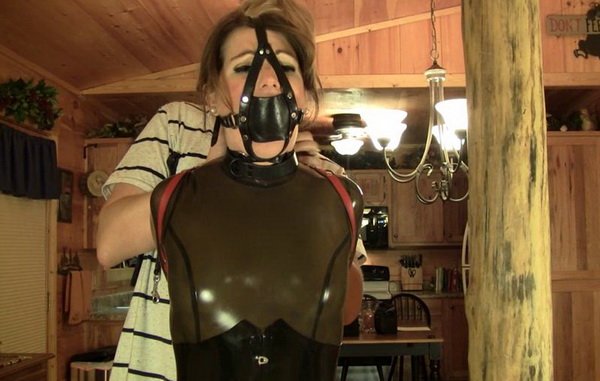 Lizz is dressed in a tight, transparent black catsuit and her and Mr Big Boss are on a company retreat to the mountains. Mr Big Boss starts out with his sexy, shiny secretary by putting her arms into a leather armbinder and lacing them up tightly. Soon Lizz finds herself tightly bound at the arms before a muzzle ballgag harness is added silencing her as it’s buckled on more tightly. Finally a collar and leash are added before Mr Big Boss makes Lizz walk a round circuit in her very tall new six inch metal high heeled boots. Lizz moans in protest as her feet strain to handle the continued stress, but Mr Big Boss doesn’t take mercy on her as he fondles her and teases her verbally while she’s walking. Soon Lizz is released to walk the circuit on her own and she does so as Mr Big Boss watches on. Finally she’s allowed to stop her circuit walk and twists and turns trying to get Mr Big Boss to take mercy on her, untie her, and move her on to something a bit more fun for her.