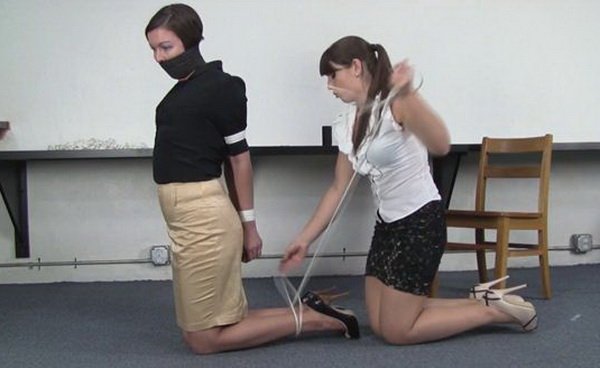 Kitty reports to Elizabeth’s office for some reprimands. She’s apparently been up to gossiping again about her co workers. Elizabeth can’t have this and she intends to punish her strongly for her misdeeds. She turns her around and puts her arms behind her back taking a length of rope and wrapping her wrists and binding them behind her back. Next she’s gagged with a large purple cloth and its held in with black vet wrap wrapped tightly around her head. Turning her around after the gag her elbows are tightly bound together next. Elizabeth then takes Kitty down to her knees and tightly binds her high heeled ankles together. She makes her crawl around a bit before taking her down to her belly and adding a new rope tightly hogtying her. Elizabeth doesn’t leave any slack in the hogtie and laces it off. She tells Kitty to struggle for her and Kitty does her best to please Ms Andrews. Elizabeth Andrews, So you ran out of gas! Of course we can help you!