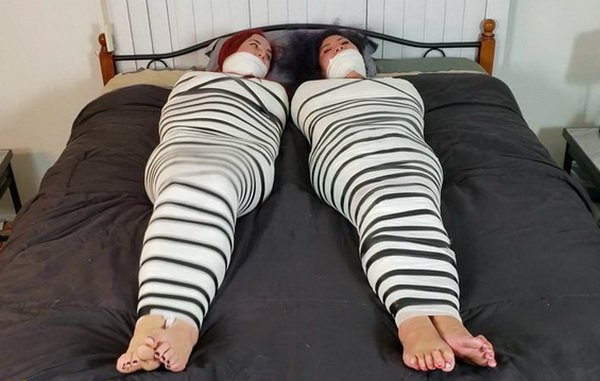 All KimChi and Davina wanted was a quiet night in. Well, they certainly aren’t going anywhere NOW! Seems a crazed burglar broke in and wrapped each girl from shoulders to ankles in tight, constricting vet wrap, and to make SURE they don’t bother him as he ransacks the home, he further tightened their bondage with band after band of black electrical tape! Now, with their mouths packed with cloth and sealed shut with more of the constricting bandages wrapped tightly around and around their face, the pretty packaged pair can only grunt, mewl and thrash as they try to get loose! About the best they can muster is to wiggle their pretty feet, showing off their wrinkled soles as they flex and strain to escape! With a maximum of effort, they manage to roll back and forth on the bed, but this only succeeds in one girl laying atop and crushing the other! Things go from bad to worse when the burglar returns and tells them that since he could find nothing of value, he’ll just take the girls! Turns out their hopes for a night in aren’t going to come true after all, but they’ll DEFINITELY be quiet! 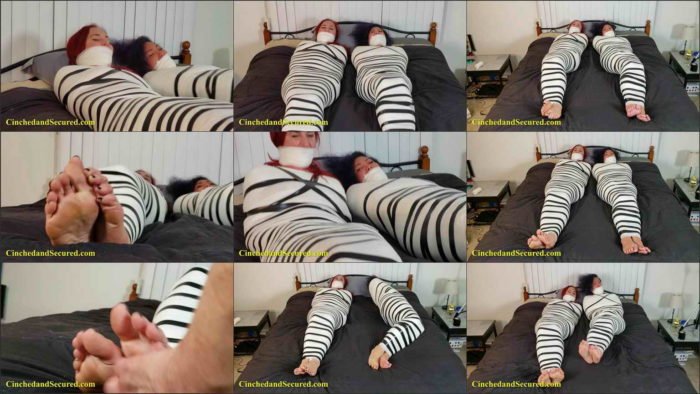 Sunshine Mummification – Those Tits Are Too Nice To Wrap!

Genevieve and Rachel Adams Mummification: Come Into My Parlor