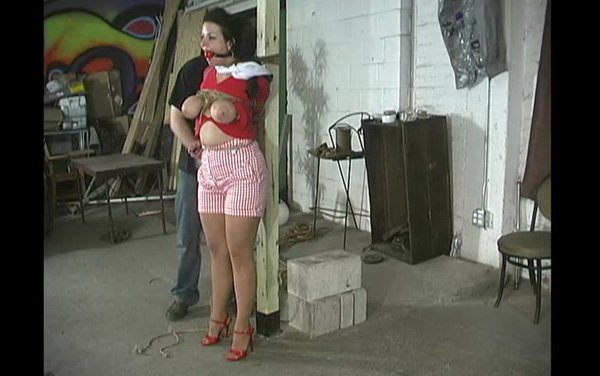 When this clip starts my arms are tied tightly behind my back and my waist is secured to the pole. It was shot in 2009 by Eric Cain. My legs are free to move around. I struggle for a bit and then he comes up to my and gags me (up close shot) with a reg ballgag. Then he ties my neck back to the pole which prevents me from moving anywhere near as much and then he swats my ass a few times and feels me up before cutting open my shirt and tieing my boobs up on screen. I try to make eye contact with him and plead with my eyes while he ties my boobs up thinking that will prevent him from tieing them so tightly, but it doesn’t work. Once they are tied up, he grabs them a few times. He takes the crotch rope and ties it off to that terrible over head pulley and yanks me up. I’m balancing on my tippy toes. When I move forward I choke myself because of the neck tie and when I move backward I pull that rope tighter in my crotch. At this point I’ve totally forgotten that my elbows are firmly welded behind my back and all I can concentrate on is that rope in my crotch with nothing but those thin cotton shorts protecting me. Then the crotch rope is removed and Eric takes the ballgag out of my mouth, but he quickly shoves in a pair of giant green satin panties which make me gag a few times because they have a peculiar taste. Rich, tired lost lady thought she had found help, but she found horror..boots and bondage video

Mummification and breast bondage by Evil, I mean Eric

Breast and chair bondage with Tamara

The two girls should have remembered to lock their door [Caroline Pierce, JJ Plush]