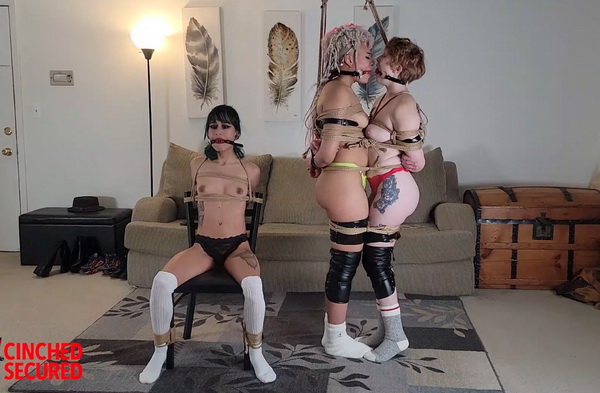 CONTINUED FROM PART 1 – Jayda Blayze, Izzebella Robbins, Lilith – Bed and Bondage Part 1
With Jayda bound, gagged and unable to help her lover Izzebella, Lilith was free to take her time enjoying and tormenting the beautiful redhead. Izzy cowered in fear, unable to drive the sound of Jayda’s moaning through her gag in the other room, her plight terrifying as the vibrator Lilith had inserted in Jayda made her tremble with desperation as her body danced on the edge of climax, never reaching it as the toy only teased, never satisfied. As Lilith stripped to her panties and climbed on to the bed beside the bound and gagged Izzebella, she delighted at the gooseflesh that covered the trembling girl’s body. Lilith enjoyed the way Izzebella’s flash quivered at her touch and when Lilith went to work on her with the vibrator, Izzebella mewled in shame, desperation, revulsion and lust. Her body eventually betrayed her, and she exploded in a powerful climax, sobbing into her gag as she did so. Lilith then bound the two girls face to face, their lips sealed by a double ball gag that kept them quiet and drooling as they looked into each others eyes, but her tormenting of the bound pair was cut short when the owner of the bed and breakfast arrived! In a flash, Lilith was stripped to her panties and tied topless to a chair, another helpless, moaning, drooling plaything! As the trio struggled to free themselves, they could only wonder when the owner would return and what he would do! 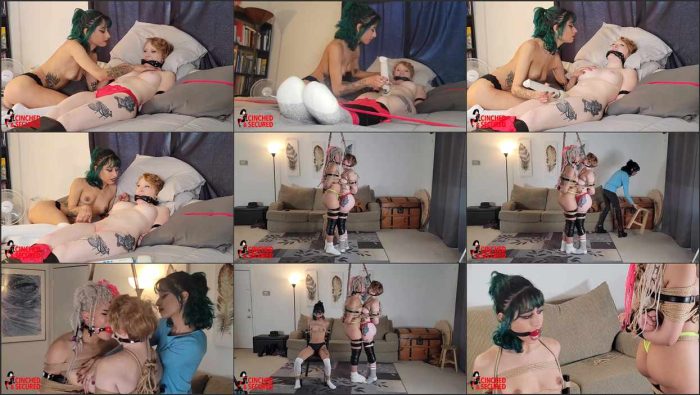 Annabelle Genovisi and the Lost Keys, Cinched and Secured

Christina Carter and the Gremlin, Cinched and Secured