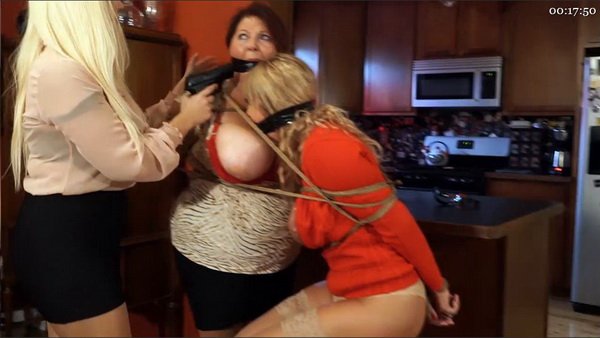 A reporter named Jamie Knotts hears that a local dominatrix is operating from her home. She thinks this equals prostitution ring. She decides to sneak in through the womans back door with her friend waiting in the car. She doesn’t realize the woman is home and watching her on camera. She is greeted by a weapon and tied up. She finally realizes who the pretty woman is but that doesn’t matter. Eventually her friend (Elane Hershey) gets worried and comes in but she is also greeted with a weapon and tied up. They both gets ballgags and they are tied into one another. Their breasts are exposed and their heads pushed into one anothers. Their gags are changed. Jamie gets a sock and black tape and Elane gets panties and black tape. They are hogtied and left on the floor mmpping helpless like while the woman prepares for her session.