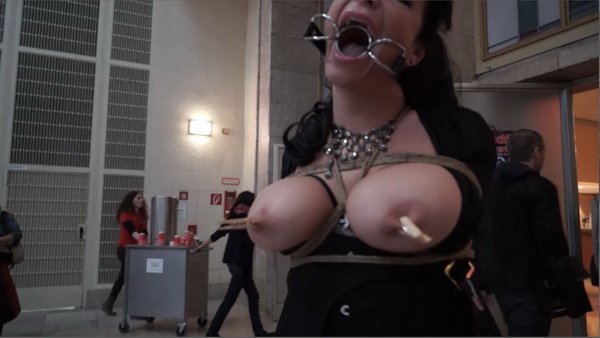 We just got back from a trip to Europe. This was live at the Venus Fair in Berlin. Venus is typically geared towards vanilla pornography however they have a fetish area as well. I was in the fetish area and nominated for Best Fetish Performer award! Awesome right? A 37 year old all natural, “plus sized” woman that doesn’t do anything nude. Anyway I didn’t win, Cobie from Australia won and it couldn’t have gone to a greater girl. She is flat out adorable and looks good in the nude ;). So back to the clip. When it starts I am in a chicken wing with a large open mouth gag. I start to walk around. Some people stop for images and Tony follows with the camera. I leave the fetish area and go into the main lobby/ hall and then venture into one of the side rooms momentarily but I don’t really venture down those aisles. They had a lot of people and filming would have been hard. At one point a man approaches and grabs the nipple clamp, when I signal that it isn’t ok he is apologetic. At one point one of the pornstars a tall very slender black girl I had never met approaches and starts to lick all the drool off of my chest and neck! I ask Tony to remove the clamps because and continue back to towards the booth and pose with a few people. Then a newscaster for the event came up. Tony asked if I wanted my gag out but the reporter said it would be much funnier if I tried to talk gagged. Agreed. One of the questions he asked me is what what one of the most embarrassing sex situations that have ever happened. I just laughed not knowing what to say and I couldn’t think of anything anyway..He seemed super disappointed in my response, lol. People are much more well mannered there than lets say the AVNS in Vegas. Well that was my experience anyway. We chose to do this walk early on Friday when most people were at work. The fair gets sooooo busy during the evening it is really overwhelming for an introvert like me. This was tolerable and much easier to film. A tightly tied up tour of Boundcon in Vienna Austria! bondage in public