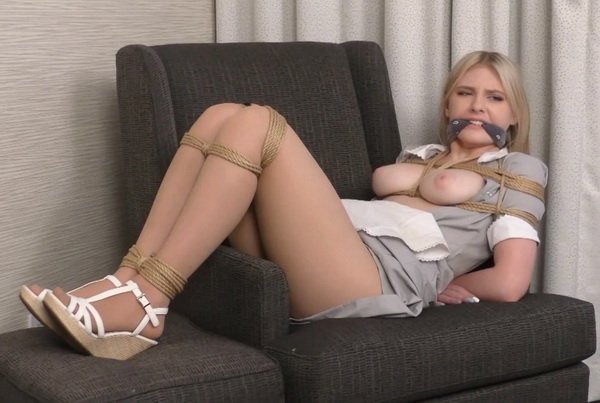 The story continues with amateur sleuth Melody Marks, hot on the trail of some stolen artwork. She gets an anonymous tip that leads her to a hotel. She dresses up in a maid uniform so she can investigate without arousing suspicion, and she’s snooping around in a room when she stumbles across the missing masterpieces! But it’s all a trap, and the adorable blonde is taken captive by the same ski-masked villain who nabbed Lola Pearl! Poor Melody is bound hand and foot in a classic position and bandana-gagged. The creep announces that despite her earlier escapes, this time she’s been promised to another underhanded fetish producer, and there’s no getting away now! Melody’s captor goes to find the producer, and the delectable detective twists and strains against the ropes. But before she can make any real progress with the knots, the bad guy returns. He opens up her maid uniform and bares her ample breasts, and pulls up her dress to show off her pantyhose-clad legs. Melody continues her struggles and tries to remain brave, but the situation seems completely hopeless! 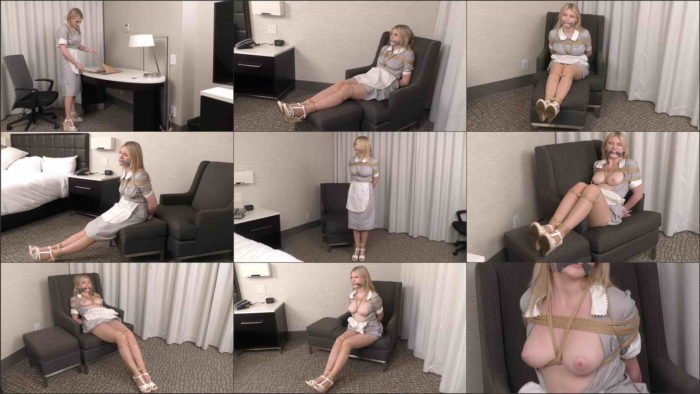