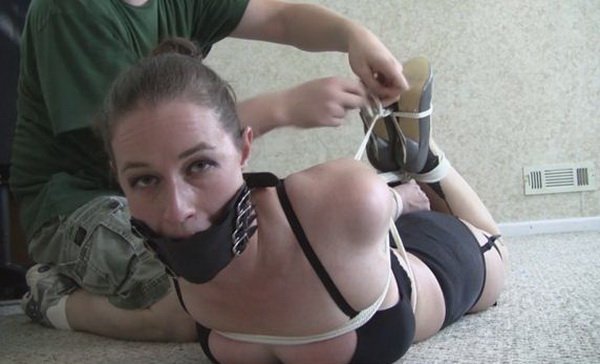 Mr. Big Boss has a big meeting to host and he needs someone to provide a little entertainment for the masses. Pepper is eager to help the Boss out in his time of need. She strips out of her dress, revealing a black bra, black girdle panty with garters and stockings. He gets right to work, as he doesn’t want to keep the other executives waiting. Though he knows they are enjoying the pre-show in the board room. Mr. Big Boss cinches Pepper’s arms tightly behind her back, forcing her elbows to touch. Her breasts are thrust forward from the tight arm bondage. He ties an upper body harness next. Once it is completed, he tells Pepper to kneel and then has her sit on her bottom. Her amazing shapely legs are extended in front of her as the Boss ties her ankles together. Pepper balances herself, as he cinches her ankles tight, with her strained fingertips. Autumn Bodell Muzzled and Hogtied in a Girdle, Stockings and SuperArch Heels