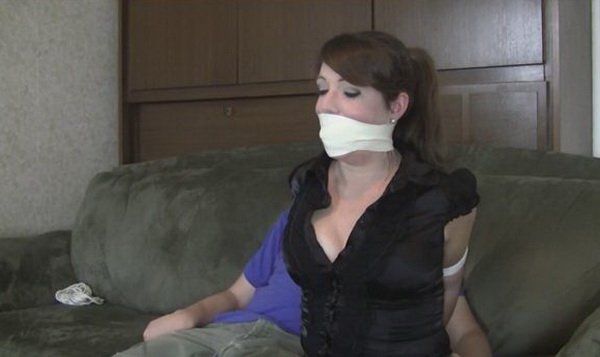 Lizz and David are watching tv when a bondage scene comes on. Lizz is clearly bored and unimpressed with the rope work and David seizes the opportunity that she presents and suggests they give some bondage and escape a try. Running off to get some rope and other supplies he soon returns and starts binding her first with her wrists and then her elbows. Lizz starts to complain about him tying her a bit tougher than was on the show and he taunts her about not wanting a real challenge. With her ankles bound he pulls out some gag material and tape and then gags her after telling her that it’s to keep her from picking the knots with her mouth. With her bound and finished he starts fondling her a bit and tickling her enjoying her cries from behind her gag. Eventually Lizz is hogtied and David relaxes and watches more of the show while she struggles and angrily moans at him for not letting her go.