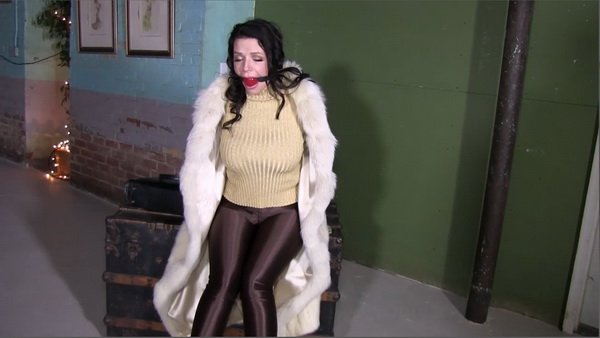 JJ knocks on the door of an old building. She is trying to sell insurance. The man inside is kind, lets her come in to have a look around. She asks him if he is aware of the robberies that have been happening in the area locally. She tells him it will no doubt make his insurance rates go up. She tells him that the women that have been robbed have also been tied up and gagged. He tells her he hadn’t heard anything about it. She works up a quote and he readily accepts it, well only if she allows him to tie her up. She agrees thinking that it can’t be that bad and in need of a good sale to maintain her lifestyle. He binds her wrists and elbows, knees and ankles and comes back with ballgag. She isn’t happy about it but allows him to do it. She is soon drooling all over the fur coat and not very happy. Then he tells her that he doesn’t own to the building. He was robbing the building and plans to leave her there tied up and to take her briefcase with her wallet and ipad!! He leaves her there to struggle around, she hops around and tried to shimmy the ropes off her arms but she can’t. He comes back with an even bigger ballgag. He stuffs her mouth with it and is off again. She hops all over trying to find another way out as he has locked her in! He returns one last time to get her car keys from her pocket and her hogties her there on the ground and leaves her again for good. Hopefully the real owner makes an appearance soon or someone recognizes her car out front.. She would have fallen for it anyway, you didn’t need to tie my gag so tightly! Kimberly Sinical & JJ tied up & gagged