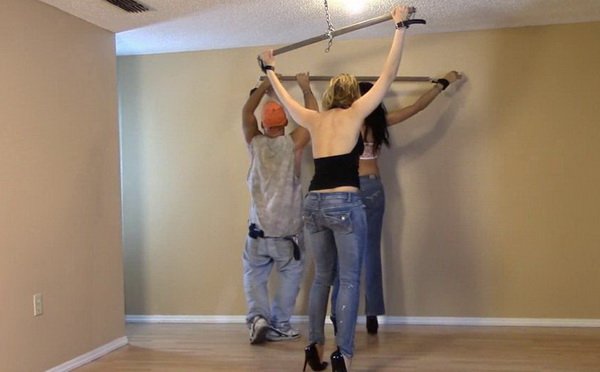 When Kelly arrives, she is shocked to see what happened to her partner in crime. She tries to rescue her, but before she can loosen anything, the man enters and orders Kelly to hold her hands behind her head and lean backwards on the wall. She is tied to another spreader bar next to Briella, so the two vixons now stand helpless tied hands above her head in their heels. Kelly protests loudly, so she also gets a nice ballgag, which she takes with litte pleasure (she really tries to avoid it). To make things worse, both their ankles are next tied to a spreader bar, what makes the ladies stand in an very uncomfortable position. Of course they try to fight it, but its quite easy to overwhelm them in their weak position. After letting them struggling, moaning, crying and whining for a while, the climax already has to come. As a punishment for their deviant attack, he takes his belt to give them a nice little spanking they wont forget soon.