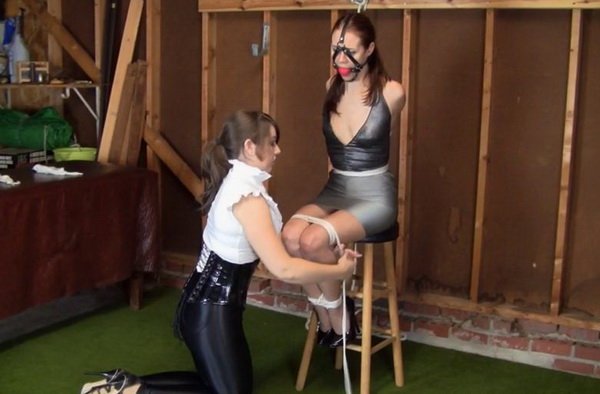 Elizabeth was waiting on Madalynn for some posture training, Madalynn is dressed in a tight silver skirt and top, pantyhose and six inch heels. Elizabeth explains what she means by posture training then straps a head harness ballgag onto her head. With the gag in place Elizabeth pulls Madalynn’s arms tightly behind her back binding first her elbows and then her wrists. She has Madalynn sit back down on the stool where she then binds her ankles tightly together before adding a body cinch rope binding Madalynn’s arms to her body. A final knee rope and Elizabeth then steps back to the pulley standing Madalynn up and putting her under the hook before attaching the harness to the pulley and pulling it up forcing Madalynn to stand tightly stretched in her six inch heels. Elizabeth turns her and positions her groping her all the while before moving back and taking up a more spectator posture… Rope Bondage Enchantress Sahrye, Serene Isley Gets What She Wants

[OfficePerils.com] Belle Davis : Caught In The Self Bondage Act [Self Gagging, Struggling]