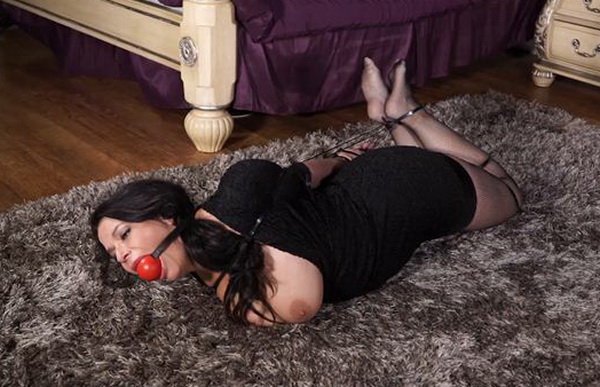 Sarah Brooke is visiting JJ. JJ had told her that she could borrow whatever she wanted to wear out to the bar that night knowing that Sarah was way smaller than she was. She didn’t think that it would be an issue. Sarah comes in with JJ’s first pair of Louboutins. Heels she bought instead of buying a pricey dress. JJ doesn’t like the idea of someone else wearing her prized heels. Sarah reminds her and says they should wrestle for it. This seems ridiculous since JJ has at least 50 lbs on the girl. Than she remembers Sarah has been wrestling in clips and taking lessons and she sees the definition in her shoulders. They agree that the loser has to be tied up and gagged and since Sarah can’t tie zipties seem fair enough. They wrestle a few times. Sarah wins all of them! Sarah puts the very privy heels on and JJ waits for the zipties. Wrists, ankles, calves, thighs, elbows, a chest harness and finally a hogtie. Of course the big red ballgag has been applied too. Sarah is beaming. She is very proud of winning the wrestle matches against a stronger woman and then successfully restraining the woman that has tortured her in numerous clips. She decides to leave JJ there for the night while she goes out wearing he fav heels. Sexy brunette in a tight boxtie hogtie, was NOT a fan of the stocking cap