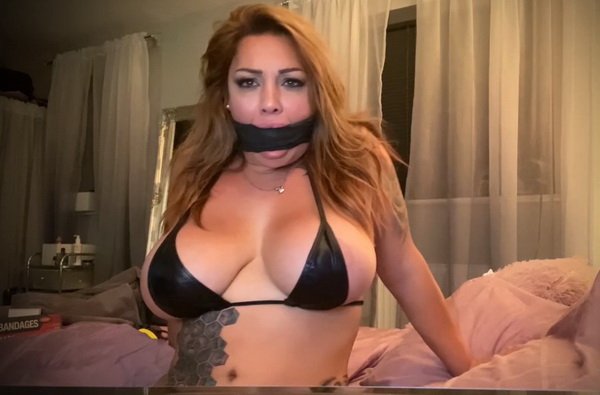 Gag 1
Rara is going to do a crazy HOT self gag video for you. She wears a microkini that not very covering at all.. Rara starts by putting a big pair of panties inside of her mouth and puts three pieces of duct tape over it to keep it in. She starts by gag talking for you switching form normal gag talk to being a bit angry at you. Rara now puts her hands behind her back simulating being captured by you. She does this while doing a lot of MMMMMMPPPHING and muffled gag talk. Rara comes a little closer asking you to let her go trough the stuffed tape gag. After a while she takes off the sticky tape and slowly pulls out the panty.
Gag 2
Rara is already gagged with black PVC tape with a big pair of panties stuffed inside of her mouth. The tape is applied so tight that you see her cheeks bulging from it. She gag talks a lot to you while bouncing her boobs put her hands behind her back to simulate a DID scenario where you have her captured. Rara even gives you a really close look at the very tight gag applied on her. When she is done with this gag she cuts the wrapped tape gag in half and while taking it off she pulls out a few hairs in the process..
Gag 3
It’s time for Rara’s last gag. She puts back in the very wet panty and tightly wraps around black vet wrap as a cleave gag. Now that the pantie is secured inside of her mouth she starts gag talking for you. You can hear a lot of MMMMMPHING coming outside of her heavily stuffed mouth. When she switches to simulating a DID scenario she is rather desperate for you to let her go. While struggling Rara shakes her boobs to make the most realistic simulation. Rara now done with all the HOT gags she wanted to do today takes off the tight cleave gag and ends you seeing her. 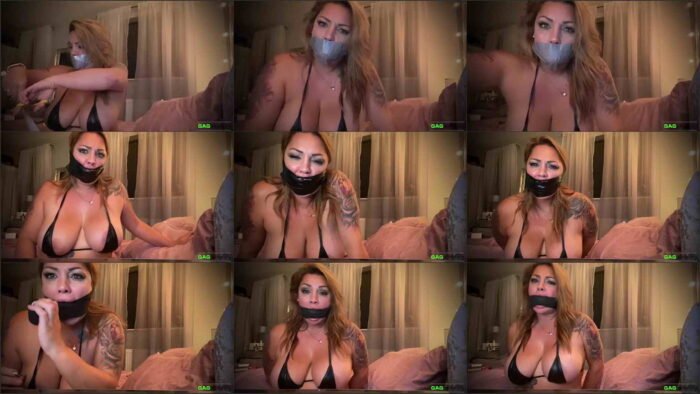 Raven Eve Self Gagged – Wish You Were Here