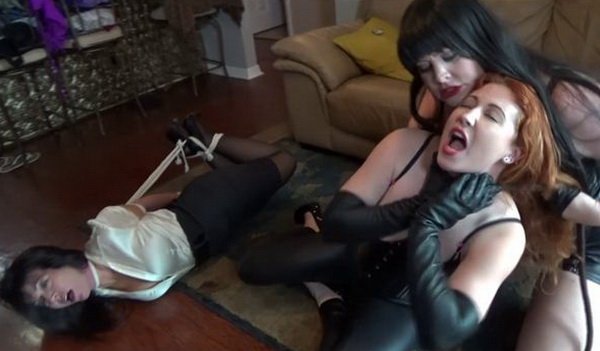 Sultry amazon domme Sophia Stone and her redhead dominatrix partner Shauna Ryanne are sitting on the couch discussing how bored they are with just playing with submissive boys. They both want a hot woman to dominate. I have no clue that they are femdoms and I go over to borrow some sugar. Suddenly Sophia stands and cracks her bullwhip at me. The whip is coiled around my neck and I struggle furiously to loosen its tight hold around my neck. I try to pry the whip away, but Sophia pulls it harder chokiing me. Shauna gets behind me and grabs my elbows and forces my head into sexy Sophia’s big tits breast smothering me. Despite my efforts to get away, both dommes are much too strong for me and I feel the room darkening as I slip down to the floor . Sophia and Shauna fight over who will get to keep me as their slave. I awake to Sophia’s large figure standing over me and she forces me to lick and worship her filthy stiletto high heels. Suffering the wrath of the asian mob moll