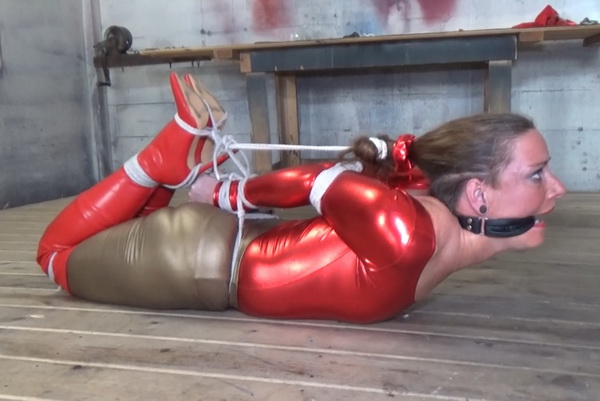 The Hunter hops defiant Fayth into the lair in her stiletto heeled over the knee boots with her legs fused together with ropes cinched around her ankles and knees. Her wrists are tied behind her back and a thick leather cleave gag is pulled deep between her teeth. Fayth bitches and protests about being made to hop around like a bunny. The Hunter stops her hopping and wraps another rope around her upper arms. Fayth grunts and gasps as her elbows are slammed together behind her back as the ropes bited deep into her bicep. With her elbows now kissing the Hunter wraps and cinches them tightly together with the rope. He then lowers her to the floor and ties another ropes around her tiny waists, trapping her forearms in the waist rope. He cinches the ropes between her back and forarms, pinning her hands to her ass. The rope is then run down between her legs and buried deep in the shiny spandex covering her pussy. He pulls the ropes taut giving her camel toe as she ropes slices deep in her spandex covered pussy. He pulls the end of the crotch rope down to her booted ankles and bending her legs up her runs the rope between her bound stiletto heels and then back down between her bound wrists. He weaves the hogtied rope between her bound wrists and ankles pulling it bowstring tight. Fayth bitches and commplains through her gag as she feel her hands touching her boots. But the Hunter isn’t finished yet as he weaves another rope into her hair and then pulls it down and wraps it around her booted feet. Pulling the hair tie bowstring tight as well, Fayth as to arch her neck and back to try to relieve some of the pressure. But the Hunter pulls that slack out as well before tying off the ropes. Poor Fayth can barely move now as she tries to rock side to side in a futile attempt to relieve some of the pressure on her neck and back. The crotch rope cuts and burrows deeper into her pussy with each move she makes. Fayth finally manages to roll over onto her side but realizes that this is just as painful as lying on her belly, but it is too late she has no leverage to roll back over. The Hunter comes over to taunt and tease her before leaving her alone for the afternoon in her brutally tight hogtie. 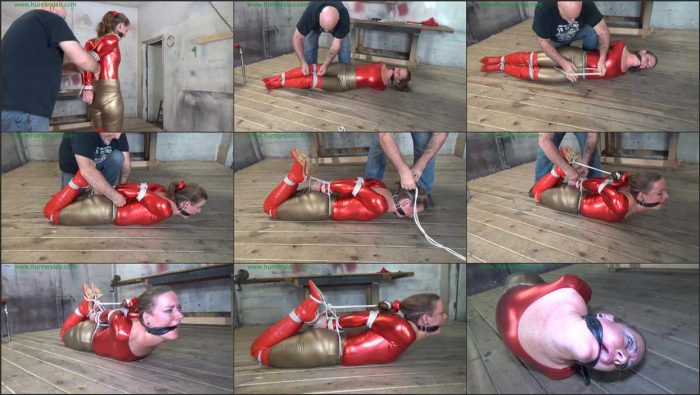 Fayth on Fire Stretched out by her cruel crotch rope & suctioned tits, jimhunterslair