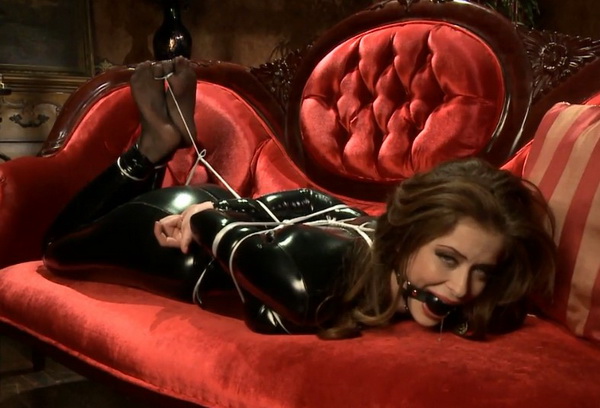 Emily Addison wows in a brand new black cat that really brings out the animal in her. The catsuit is from the fab folks at Winter Fetish. It has cups sew in so Emily’s rather wonderful breasts aren’t squished by the super tight fabric. And TIGHT it is. It’s like we poured a bucket of black paint on her. The shoes were made by Tony at Hotpeppers. Unfortunately, he passed away some years ago. He was such a great dude and made such fab shoes. These particular ballet shoes are all about how they lock on – and how they look. Add great hair and makeup by Julie and you have some really cool pics – and yes, that is Emily’s little pooch Gandalf. 😉
I was at the hardware store the other day and saw these bundles of white nylon string. I grabbed a couple thinking that they would come in handy one day. It took awhile, but day did come, and Emily Addison was the lucky, or maybe I should say unlucky lady who ended up getting to test them out. I know it may be hard to see, but I really tried to keep these super thin “mini ropes” neat, which was not as it turns out an easy task. The final product turned out just like I wanted and besides being pretty, the whole bondage was completely effective, as well as very tight. Pretty cool if I do say so myself… which I am saying… 🙂
Just like any good bondage, it’s the little elements that really push it over the top. Like the crotch string that is attached to her wrists, which not only gives her immediate feedback whenever she struggles, but also keeps her her hands just where I wanted them. Away from any knots that she might think she can untie. That isn’t happening – and even if she could reach them, I doubt quite seriously that she is going to be able to untie them. I had to cut these off of her. 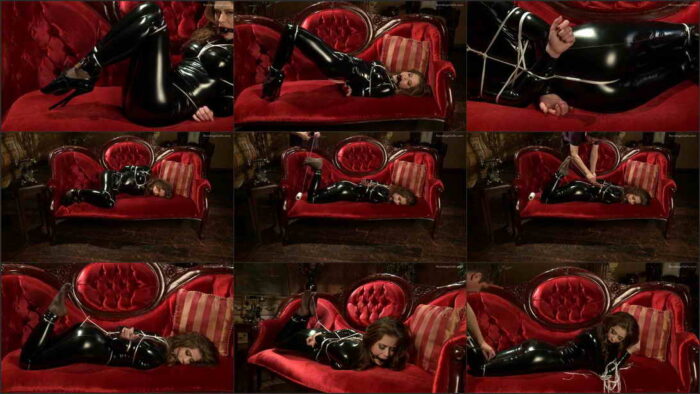