Home » General » Elizabeth Winters and her boyfriend in distress 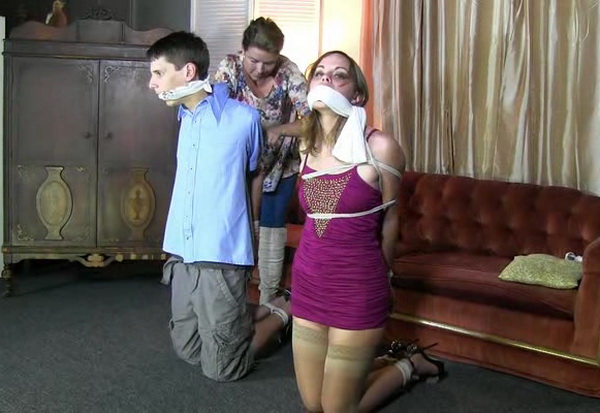 These college students were looking to have a little fun with their parents money. They met an older couple at a bar and the couple told the two that they had some ecsta sy pill s. The students quickly invite them back to their place but upon arrival the man pulls a on them and the woman goes to work tying them up- first the pretty young girls wrists. The woman pulls up her dress and makes the boyfriend remove her panties and stuff them in his girls mouth. The woman wraps her head with a cloth and then ties the boys wrists and gags him with a knotted cleave. The couple ends up hogtied and BOTH elbow tied on the floor! They struggle to get free. The guy is able to undo his hogtie rope and he sits up and digs at his pretty girls knots with his elbows still bound together but the older couple is long gone by now with a fancy purse full of money. The models are Elizabeth Winters and her boyfriend.